Stop what you’re doing and click on this trailer for Todd Field‘s Little Children (New Line, 10.6). It’s probably the best trailer for a dramatic film I’ve seen this year, no shit. It really grabs you, and it’s almost all about the sound. No music, almost no talk, no story. All you hear is a wonderfully haunting, far-off train horn in the distance. And the whole piece just seeps right into your soul the second you start watching it. 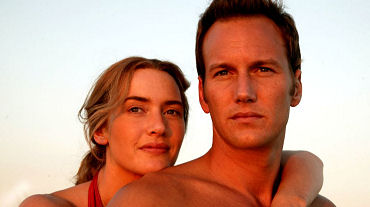 The trailer tells you right off that Little Children is a smart, A-level drama about suburban infidelity with a kind of John Cheever-ish guilt-trip atmosphere. It tells you it’s about Kate Winslet and her little red-headed daughter (who actually looks like her…amazing), and an extra-marital affair she has with Patrick Wilson, and how Jennifer Connelly, playing Wilson’s wife, fits into the general discomfort.
Fields’ script is based on Tom Perrotta‘s novel of the same name, and there’s more to the story than an extra-marital affair, but for the purposes of the trailer and the “sell,” it works beautifully. And with the train-horn effect and all (I used to listen to that lonely sound every night when I was a kid living in a sedate New Jersey suburb called Westfield), it feels exciting. As in original, grabby, exciting.
< ?php include ('/home/hollyw9/public_html/wired'); ?>
The idea for the trailer came from Field in a meeting in…actually, there’s some debate about that. Two sources say that the first creative sitdown happened in very late 2005, and another says it happened in March or early April of 2006. That’s a huge discrepancy, but whatever.
The main thing is that Field said early on that he didn’t want the Little Children trailer to have music, dialogue or story. The guy he told this to was Mark Woollen, 35 year-old owner of the Santa Monica-based Mark Woollen & Associates, an agency known for creating smart atypical trailers for hip movies like About Schmidt, Adaptation, I Heart Huckabees and The Royal Tenenbaums.
The other agency guy in the room during that first meeting was Woollen’s top editor, Chad Misner. The third principal party was New Line executive vp creative advertising Laura Carrillo, who had brought Wollen and Misner in.
“The train horn came from something that Chad found,” says Woollen. “And we had a piece cut together by January ’06, which was pretty mich the version you’re seeing now.” Another source says Woollen’s train-horn trailer was delivered closer to early April 2006. (Are these discrepancies amazing or what?)
“So we showed it to Todd and he was very turned on,” Woollen says. The other source says Woollen’s first cut wasn’t quite as train-horn pure as the final version. Field and Little Children editor Leo Trombetta actually cut together a trailer of their own around this time, and I’m told that a fair portion of the elements in their version made it to the finish line. 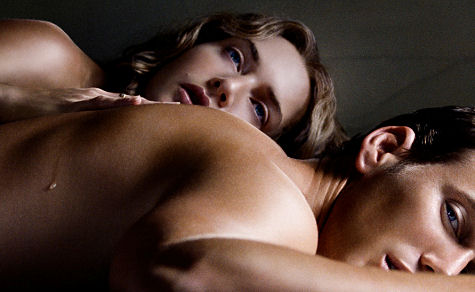 “And then we spent several months revising,” says Woollen. [The New Line people] wanted to see how it would play with music, which we worked on in June. The final version was locked only just recently.”
As it turned out, the final version does have a few quiet lines if dialogue, but they’re spoken in almost a whispering way. I especially like Kate Winslet’s line about how almost everyone she knows has “a hunger for alternatives and a refusal to accept a life of unhappiness.”
From Carillo’s point of view the trailer was basically a Field-and-Woollen show. “Mark really wrapped his brain around this [piece],” she says. “He began as a trailer editor and has grown this company on his own. He likes to be away from the whole Hollywood thing but tends to be a very collaborative partner with filmmakers.
“I also know that early on, Todd brought up the metaphor of trains connecting all these towns in America. I wrote this down as a note. As you’ll see in the movie., there are trains and train sounds in it. Todd shot lots and lots of trains, although a lot fewer made it into the final cut.”
The operative phrase here is a famous one: success has many fathers and failure is an orphan.

Woollen started his company in ’01. He’s been cutting trailers since he was 18. The first trailer he did that he was really proud of , he says, was one for Schindler’s List.
Mark Woollen and Associates also did the trailers for Crash, Brick, Syriana, March of the Penguins and Hard Candy.
Note: This piece was slightly re-written between the time it was posted early Friday evening and Saturday morning at 9:40 am, some 15 hours later.