No Comments
Leth talks to Goldstein

“Actually, I’m totally objective because I’m too cynical about Haiti to take sides. Everyone there is trying to kill each other. And in another five years, it’ll be a new bunch of guys doing all the shooting. When it comes to Haiti, it is a place I love, but it is also a place where I lost all my illusions.” — Ghosts of Cite Soleil director Asgar Leth speaking to L.A. Times industry columnist Patrick Goldstein.

An anonymous buyer (but a guy I know and trust) has some takes on various Toronto films:
(1) The Fall — Probably the best film so far at the festival. Visually stunning with fantastic performances by unknown actors, including the little girl. Don’t think it will be a huge film at the box-office but may well develop a strong cult following.
(2) Penelope — A serious misfire. The film`s goals are great but it doesn’t seem to reach its full potential. Typical directorial debut. Reese Witherspoon has a glorified cameo, but whoever it ends up with won`t be able to sell the film on her name alone.
(3) Black Sheep — Saw it with the audience at midnight madness and they went crazy, and yet it’s nothing more then Sheeps on a Plane. No way this makes a killing at the box-office because the NZ accents kill half the jokes and you get tired of the sheepish gore after 40 minutes. The last half-hour of this glorified B-Movie is a complete clusterfuck that includes sheep-human sex and someone having their manhood cut off by a sheep.
(4) Bonneville — What can I say? A strong performance from Kathy Bates. The movie has a
really slow start and the final act is repetitive. There`s an amazing scene in the third act that got the audience crying. This is a film for older women, which is one of the hardest demo for box-office numbers.
(5) The Pleasure of Your Company — Michael Ian Black`s film is either AMAZING or AWFUL depending on who you ask. The Gen-Y audience I saw it with absolutely adored it on Sunday night while the buyers were apparently walking out in droves on Monday. This is a movie for the twentysomething crowd. Unfortunately not everyone gets it. Fun script, strong cast, some good laughs. W
(6) Love and Other Disasters — The first 20 minutes are a disaster and because of that it will not be a
box-office success. Murphy’s accent is weird and the supporting cast steals the show but not enough to make it a good film.
Two more movies with a deafening buzz, or something close to that: El Cantante and The Hottest State.

There’s a shot at catching a press-industry screening of Death of a President later this morning, as well as a public screening of Black Sheep, which hadn’t apparently sold as of last night, despite expectations to the contrary. Having missed it yesterday (the press-industry screening was full by the time I got there), I asked an IFC guy for his reaction. “It’s good, it’s funny,” he said. “Tell me what you think when you see it.”
Newmarket pacted yesterday to handle the U.S. distribution of DOAP, which has picked up a lot of heat (some of it adverse) because of its fictional depiction of an assassination of President George Bush. There’s also said to be ardent interest in acquring Sarah Polley’s feature directing debut Away From Her, a coping-with-Alzheimer’s story with Julie Christie.
I got into a small VIP theatre screening of Anthony Minghella‘s Breaking and Entering (Weinstein Co., 12.8 limited), a smart, well-written, not entirely successful drama about…well, a lot of things. A short list would include social inequity, trust, thievery, infidelity and caring for errant children in modern-day London. It costars Jude Law, Robin Wright Penn, Juliette Binoche, Vera Farmiga (in a standout supporting role as a Russan prostitute), Ray Winstone.
It’s the infidelity aspect that caught my attention, and I probably won’t be alone. Law’s character — a well-to-do architect — is the infidel, you see, and there’s no way to brush aside his own personal history with this subject, not to mention his having played a philanderer in Mike Nichols’ Closer.
I have to leave already — the DOAP screening starts in less than an hour — and I’m frankly wondering about my ability keep burning the candle at both ends. As usual, I expect to file some stuff later on this afternoon. I have a Todd Field interview scheduled for 2:45 or thereabouts, and several other things to attend to. My head is spnning, the wheels are turning….the pressure is on again.

I ran into Ghosts of Cite Soleil director Asgar Leth last night at the rooftop bar on top of the Hyatt. I saw his knockout documentary, which also played at Tellruide, six months ago in Los Angeles vai the good graces of exec producer George Hickenlooper. It’s a kind of Cain-and-Abel story that was filmed entirely in Haiti just before, during and after the overthrow of Haitian president Jean Bertrand Aristide in March 2004. An excerpt from the piece I wrote: “I now see Haiti as less of a Ground Zero for abstract political terror and more of a place where people on the bottom rung are trying to live and breathe and create their own kind of life-force energy as a way of waving away the constant hoverings of doom. In short, this excellent 88-minute film adds recognizable humanity to a culture that has seemed more lacking in hope and human decency than any other on earth. It’s been a kind of growth experience for me. I feel like I almost ‘get’ Haiti now, and I haven’t stopped telling people about it since.” 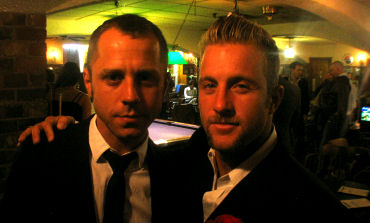 The Dog Problem star Giovanni Ribisi, director-costar Scott Caan at very casual after-party following Monday night’s screening at the Ryerson; A Monday evening dinner party thrown by Samuel Goldwyn Films for Bob Goldwaith’s Sleeping Dogs Lie, a comedy about secrets, intimacy and dog-fellatio — pic gets into the potent topic of “how much is too much to share with your partner?” and not just in a hah-hah vein; Michael Jacobs photo sent along to commemmorate yesterday’s fifth anniversary of 9.11.01.
September 12, 2006 5:58 amby Jeffrey Wells