“…then I realized, Gawd laeft this playce a lawwng time ago“…that’s Leonardo DiCaprio ‘s final line in the trailer for Ed Zwick’s Blood Diamond (Warner Bros., 12.15). This is being positioned by Warner Bros. as an Oscar-worthy movie, but The Last Samurai taught everyone that you have to be careful with Zwick. He can be tasteful and restrained at times, but also ham-fisted — for my money his emotional points have too often been underlined with a black felt-tip marker. 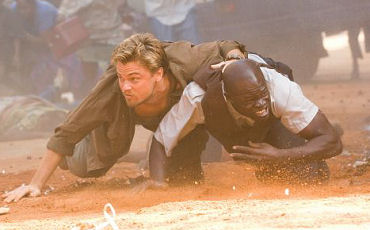 But the trailer tells me that DiCaprio — one of the three leads in Diamond, along with Djimon Honsou and Jennifer Connelly — is a strongly positioned Best Actor candidate. We all know that the Academy always responds to actors playing (a) handicapped characters, (b) characters with exotic accents (i.e., the Meryl Streep syndrome), and (c) characters that have required the actor to put on weight, wear a fake nose or teeth, or otherwise make him/her look less attractive than normal. DiCaprio’s South African accent in the trailer (which sounds pretty good to me — can any South African readers tell us if it sounds right to them?) indicates he’s definitely lived up to the Streep syndrome.
This means he’s on the brink of entry into the Best Actor finals if….if (and I can’t underestimate the importance of this qualification) Zwick’s film isn’t too Samurai– like. If Diamond turns out to be as compelling as it could be (it’s apparently an action-fortified moral tale about greed and redemption, set against the backdrop of the Sierra Leone civil war of the 1990s with DiCaprio playing a guilt-wracked South African mercenary), the combined heft of Leo’s morally-flawed-guy-who- becomes-a-man-of-honor plus his hard-punch performance as a mole inside a criminal gang in Martin Scorsese‘s The Departed could put him near the top of the heap and right up against Peter O’Toole (Venus), Forest Whitaker (The Last King of Scotland) and Derek Luke (Catch a Fire) and…who else?
I know, I know…Will Smith in The Pursuit of Happyness, right? But think about it — doesn’t Smith need to be bitch-slapped and kept down for playing the role of the rich, over-pampered movie-star smoothie and starring in Wild Wild West , Independence Day, Shark Tale and other such shite? Smith is a natural-born charmer with a gleaming smile who’s really good when he’s talking with Access Hollywood reps on the red carpet, and now that he’s shifting into major heart-tug mode in Happyness (and opposite his own son yet) we’re supposed to just topple …is that it?