“Fire” at the Elgin

Screen a film about a real-life character who endures some kind of prolonged, life-threatening hell only to emerge alive and healthy at the end of the trail, and you’re almost certainly going to move people. Show this very same film at a public screening at the Toronto Film Festival, and when the lights come up people are going to rise to their feet and cheer with lumps in their throats and eyes rimmed with tears. 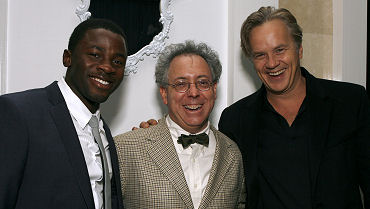 This is what happened at last Sunday’s (good God…four days ago) screening of Phillip Noyce‘s Catch a Fire (Focus Features, 10.27). I heard about it at the after-party at Lobby, and it sounded right because I’d had a similar reaction myself when I saw a longer version of Noyce’s film a few months ago.
Fire is the real-deal tale of Patrick Chamusso (Derek Luke), a South African factory worker and family man who was essentially goaded into becoming an anti-apartheid radical after he was falsely accused of being a domestic terrorist, and thereafter bullied and terrorized, by a South African secret policeman (Tim Robbins) and his goon squad.
The story concludes with Chamusso blowing up an oil refinery and then getting popped and sent to prison, only to be set free after the white-run South African government is voted out of power.
The emotional payoff happens at the very end when Noyce stages a real-life, happy-ending greeting between Chamusso, Luke and himself — everyone relieved and hugging each other and looking forward to a fair and just future. And then Chamusso addresses the camera and tells what his life has been like (generally happy, running an orphanage) since he got out of prison.
I wasn’t at the Elgin to witness the lights coming up and a spotlight finding a certain gentleman in an upper balcony and a loud voice announcing, “Ladies and gentlemen, Mr. Patrick Chamusso!”…but The Envelope columnist Tom O’Neill was, and he described it pretty well the other day so here it is. 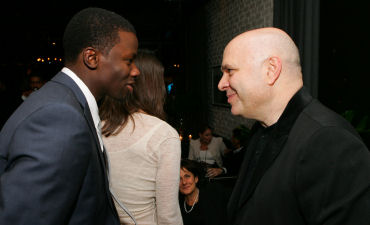 I tried to run photos of the Catch a Fire after-party the next morning, but it took two days to finally get them sent to me free and clear withut any password mucky-muck,and by that time my focus and momentum were elsewhere. Whenever I take my own photos the process is always cool and easy and fast — whenever I ask publicists or staff photographers to send me photos it’s always tedious and time-consuming…no offense.
I’ll get into Catch a Fire at greater length in two or three weeks. It’s a significant accomplishment to just get this much posted. Everything it taking three our four times longer to write than it usually does. I’m so whipped and fried that I’m starting to get angry about it.