“Will Martin Scorsese‘s The Departed becomes a question-mark film?” asks Dennis McDougal in a 9.17 N.Y. Times piece. “Will it reintroduce Jack Nicholson to a new generation, as Batman once did? Or will his Frank Costello [character] smack of geriatric retread: The Last Detail‘s Badass Buddusky meets The Shining‘s Jack Torrance, only more debauched?” 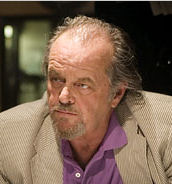 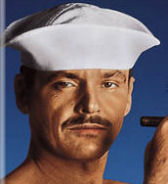 (l.) Jack Nicholson in The Departed; (r.) in The Last Detail

I won’t see The Departed for another couple of days, but of all the characters Nicholson has played, Badass Buddusky is by far the the most kind-hearted, sentimental and childish, which he covers up with standard enlisted-man macho bluster. Jack Torrance is a little more in the realm of the Costello character, whom McDougal describes as a character who is “losing his mind” and who is allegedly seen in the flm “eating an insect, wielding sex toys, bathed in blood and more or less personifying evil.” But Torrance, of course, is a fuckup — a would-be amateur who can’t write, can’t kill and gets spooked by old-crone ghosts.
Will The Departed “even the score for Mr. Scorsese?” McDougal asks. “Or will it simply provoke nostalgia for an era when Nicholson and Scorsese together would have been a sure thing?
“In any case no one can accuse these two old pros of lacking self-awareness. According to a scene included in a trailer for the film, The Departed has Costello asking after an acquaintance’s sick mother. Sadly the man tells him, ‘She’s on her way out.’ And Nicholson replies, ‘We all are. Act accordingly.'”
Oh, and I love this other McDougal graph, which opens the piece…
“There was a time, not so very long ago, when the first-ever pairing of tMartin Scorsese with Jack Nicholson would have been a guaranteed hit. But that was before DVD’s, MySpace, YouTube and, most recently, the decline and falter of Tom Cruise. When Viacom’s chairman, Sumner Redstone, evicted Mr. Cruise from Paramount last month, citing his ‘erratic behavior,’ it signaled a new era when no amount of star power could assure that a picture would be seen as an event.”