Peter O’Toole‘s performance as an aging, spirited, rogue-ishly randy actor in Roger Michell‘s Venus (Miramax, 12.15) hasn’t been overhyped — I saw the film late yesterday afternoon and it’s certainly one of his very best. But it has been, I think, under-described. It’s a performance of profound tenderness and vulnerabilty …artful frailty, if you will. 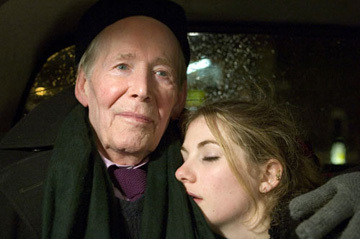 O’Toole is 74 and is playing a man in his early to mid ’80s, and bravely, it seemed to me. He makes you chuckle at times, and of course is charming to the last, but it’s not an audience-pleasing “performance” as much as a piece of naked exposure about what it is to be at death’s door and stll wanting to be alive in every way you can.
It’s a beautiful job, and it makes me all the more sad that O’Toole won’t be coming to Toronto after all. It was announced yesterday that he’s too sick to travel from Britain. Something about “intestinal problems, which he’s had before,” according an a story in Tom O’Neill‘s column.