Naturally, Hollywood being Hollywood, there are cowards and caution freaks out there who feel that releasing Clint Eastwood‘s Flags of Our Fathers and Letters From Iwo Jima within a couple of months of each other (the former via Paramount/DreamWorks on 10.20, the latter sometime in December via Warner Bros.) will be risky and “will be seen as a stunt” and may wind up splitting Academy votes if and when both get nominated for Best Picture. 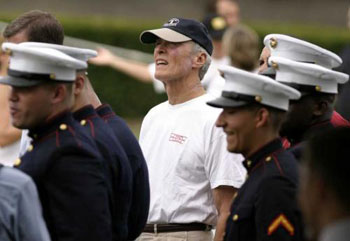 A split vote situation could happen — I haven’t seen either film and haven’t a clue about which is better, or even if either film is Oscar quality — but we all know what will most likely occur. All of us except for the nervous nellies, that is, who are running around in circles right now going “ooh! ooh! risky! risky!” and wiping sweat beads off their brows.
Flags — a story about the American soldiers who were over-celebrated as the flag-raising heroes of Iwo Jima’s Mt. Surabachi, and about the torn feelings they experienced as a result of all the hero worship — is, naturally, obviously, the Clint Eastwood Iwo Jima film most likely to be touted as a Best Picture recipient.
And no matter how good Letters From Iwo Jima turns out to be, it’s still not a film about Americans and the American combat experience, and therefore won’t channel American feelings — boomer sentiments, patriotic stirrings, sympathy for Iraqi war veterans — the way Flags will, and will therefore be regarded by 95% of the Academy as strictly backup — a respectable support movie for Flags that will provide poignant echoes and whatever else it manages to stir up.
“Qualifying Letters for awards consideration could destroy Flags‘ Best Picture chances,” wrote one prognosticator. “Maybe WB and consultant Michelle Robertson have decided that it’s a soft field this year and they can get two nominations. But I don’t really think so. Maybe the WB team thinks they can out-hustle Terry Press and make the Japanese film the nominee.”
At least this trembling observer threw in the following words, which are obviously the bottom line: “If it turns out that Flags is the Oscar movie of 2006, all of this will be a footnote after a great deal of media hype. If it turns out that Flags is just another quality contender, the strategy could be a disaster.”