The buzz on Alfonso Cuaron‘s Children of Men (Universal, 12.25), which had been teetering since Universal bailed on its original early fall opening in favor of a Xmas debut, has now downshfted due to a yes-and-no Venice Film Festival review Variety‘s Derek Elley, along with a similar view posted by Screen Daily‘s Steve Marshall. 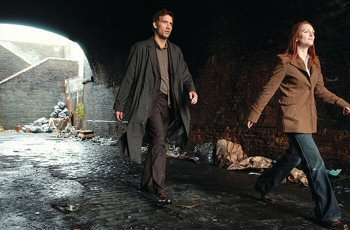 Children still sounds like an absolute must-see, but these reactions leave me with no choice but to scratch Children from Best Picture consideration, and to scratch Cuaron from the Best Director ranks. Sorry, Uni publicity pallies, but it’s a tough world out there and cigars cannot be handed out for “pretty good” with two exceptional standout selling points.
Elley gives Children of Men a passing grade, but says the only aspects of this futuristic melodrama that really and truly kick ass are Emmanuel Lubezki‘s hand-held cinematography and Michael Caine‘s supporting performance as an eccentric hippie-ish type. Otherwise, he says, it’s not bad, spotty, touch-and-go.
Elley praises the “gritty, docu-like sequences [in which] Cuaron and camera operator George Richmond orchestrate several lengthy single takes that have a front-line feel….these include an attack in a car (a single take that required a special rig for the camera to get inside and around the car) and the movie’s showpiece climax. Latter single take recalls Full Metal Jacket in its landscape and Black Hawk Down in its intensity.”
He also singles out Caine for bestowing “some heart and soul due to a wonderfully eccentric [turn] that’s awards-season-worthy. Caine’s beatific performance, in hippie spectacles and shoulder-length hair, is treasurable, and provides the two shafts of sunlight in the otherwise gray and wintry movie,” he says.
Otherwise, Elley calls Men “an often grippingly realized portrait of a not-so-futuristic Blighty, in which fascism and infertility have become uneasy bed partners” but ” a fine but flawed exercise in dystopia. Much more effective when it’s a down-and-dirty actioner than when the script tries to grapple with the multitude of personal and political issues raised, pic suffers from cold lead playing by Clive Owen.
“Set only 21 years in the future, in November 2027, pic — based on the 1993 novel by British writer P.D. James, better known for her murder mysteries — posits a world racked by infertility and social chaos, in which terrorism is the norm. The U.K., however, is a relative haven of peace — ‘The world has collapsed; only Britain soldiers on,’ trumpets Brit-TV propaganda — and as a consequence immigration is out of control.
“Cuaron clearly got to know Blighty when shooting Harry Potter and the Prisoner of Azkaban. He paints a grungy, Orwellian country of perpetual security announcements, prowling armed police, garbage in the streets and illegal immigrants in cages — in fact, not so different from the U.K. today, and far more believable in every respect than in the feeble V for Vendetta.”
Elley says that “Cuaron’s decision not to shoot in widescreen actually accentuates the movie’s gritty power” — which means what? That Cuaron went with a 1.33 to 1 aspect ratio like Gus Van Sant‘s Elephant and Last Days, or that he shot it in standard, no-big-deal 1.85 to 1? Is Elley hinting that the normally effective way to shoot a dark futuristic flick is to shoot it in widescreen scope (2.35 to 1)? This part of the review lost me.