I’ve finally seen all 54 minutes’ worth of Michael Tucker and Petra Epperlein‘s intensely absorbing The Prisoner or: How I Planned to Kill Tony Blair — half of it at the Royal Ontario Museum a couple of days ago, and the second half via a DVD screener that was graciously provided by publicist David Magdeal. 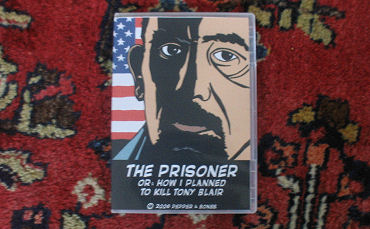 One of the things everyone loves about the Toronto Film Festival is that you sometimes out of nowhere you find yourself watching a political documentary that’s unusually smart and exceptional all around the track. The Prisoner is one of these.
It’s basically about a freelance Iraqi journalist named Yunis Khatayer Abbas telling Tucker and Epperlein his story of having been arrested by U.S. troops (the incident was originally seen in Tucker and Epperlein’s Gunner Palace) and subsequent imprisonment for plotting to kill the British Prime Minister
The charges against Abbas were total bullshit, but at the time his prosecutors and incarcerators weren’t kidding. Months after being cuffed and thrown in the slammer, Abbas was let go after U.S. officials finally realized that a mistake had been made. Sorry, dude, shit happens, etc.
The Prisoner is partly a tragedy, partly a comedy and a 100% metaphor for the daily parade of bogus accusations, poorly considered military maueuvers and adminstrative screw-ups that apparently are par for the course for U.S. and British officials and soldiers in Iraq these days. That’s my take, at least.
I especially enjoyed Tucker and Epperlein’s use of graphic-novel images to emphasize the story points. I suppose Iraq tragedy is a cartoon on some level these days, or at least seems that way to some.