The trailer for Richard Eyre‘s Notes on a Scandal (Fox Searchlight, 12.25) is very nicely done, but my goodness…it’s one of those trailers that gives away 90% of the movie. I feel I’ve really and truly seen it now, on top of being instructed how obviously top-tier the performances from Cate Blanchett, Judi Dench and Bill Nighy are going to be. Now, it seems, the only thing to do is sit down and see the feature-length version. I didn’t realize how Fatal Attraction-y this was going to be, to judge from the descriptions and whatnot. It certainly seems to have been cut from the same cloth. 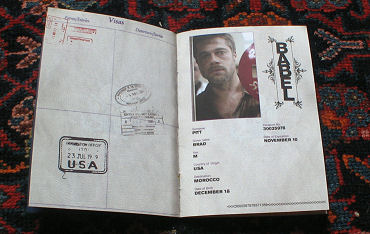 Now I really want to watch the Dixie Chicks’ Shut Up & Sing documentary, which the Weinstein Co. is opening in New York and L.A. tomorrow and nationwide on 11.10, now that the the cowardly NBC and CW networks are refusing to air ads for the film, apparently because they’re afraid of whatever political blowback may result from vengeful apparatchiks in the Bush adminstration. 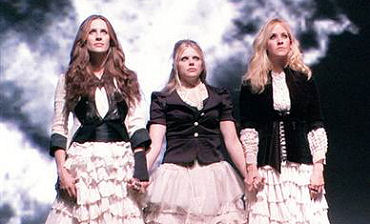 Harvey Weinstein, co-owner of the Weinstein Co., is fuming about this turndown and complaining big-time to Matt Drudge, who apparently broke the ad-turndown story this evening. “It’s a sad commentary about the level of fear in our society,” Harvey’s saying, “ that a movie about a group of courageous entertainers who were blacklisted for exercising their right of free speech is now itself being blacklisted by corporate America. The idea that anyone should be penalized for criticizing the president is sad and profoundly un-American.”
Drudge is reporting that NBC has said the network “cannot accept these spots as they are disparaging to President Bush” and that the CW is explaining its refusal is because it “doesn’t have appropriate proramming in which to schedule this spot”
Barbara Kopple‘s Dixie Chicks doc, which I didn’t manage to see at the Toronto Film Festival, is, I’ve read and been told, an above-average behind-the-scenes look at the political fallout that that happened in ’03 after the group’s lead singer Natalie Maines said she was “ashamed the president of the United States is from Texas.”
Drudge is reporting that the Weinstein Company “is exploring taking legal action.” The rejected commercials for “Shut Up & Sing” can be viewed here.
The Dixie Chicks ad turndown follows last week’s story about Fox, NPR and CNN refusing to run ads for Newmarket’s Death of a President, which is partly about the fictional shooting of Bush at a Chicago political rally and how the government is subsequently a little too eager to pin the blame on a man of Middle Eastern descent.

According to Advertising Age reporter T.L. Stanley, a research report titled “Hollywood Online: Ad Innovators Play Spending Catch-Up” is saying that “studios have made a misstep by not increasing their online spending sooner in order to reach the coveted young consumer who spends significant amounts of time on the web.”
“Studios spend about 3% of their marketing budgets on online ads, which is below the 5.7% that the average U.S. industry spends, according to the eMarketer study. Hollywood is expected to make up some ground, though, spending 8% of ad budgets online by the year 2010. That translates to $526 million and 17% of studios total ad spending. Other marketers will spend about 8.9% of their budgets on the web by that time, the study found.”
The study said that “a number of movie marketers surveyed put that figure considerably higher, or more in the vicinity of 6%.

A nicely put David Poland/MCN copy link — “a Bosley Crowther moment?” — went up a while ago regarding this John Patterson Guardian piece about Martin Scorsese and The Departed . Patterson trashes the film and harumphs that “after an enormously fulfilling relationship of nearly 30 years, it may be all over for me and Scorsese [since] I cannot decently call The Departed ‘a return to form’, which seems to be the prevailing opinion.” It’s perfectly fine to roll with your own opinion in whatever direction, but that’s what Crowther was doing when he (a) praised Cleopatra, (b) questioned the appropriateness of mocking the defense estab- lishment in Dr. Strangelove and then (c) trashed Bonnie and Clyde. 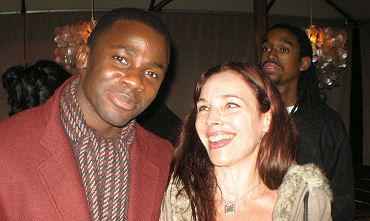 Catch a Fire star and Best Actor contender Derek Luke, admirer Ellen Stone at Wednesday night’s post-premiere party at the Cabana Club. Not to be a spoil-sport, but it’s not the smile of a pretty girl at a big glitzy party that matters, but whether or not the same pretty girl smiles or even greets you when you happen to run into her at Amoeba Records three months later. General George S. Patton said it: “All glory is fleeting.” I tried every so often to find Catch a Fire director Phillip Noyce, but no luck.
October 26, 2006 5:34 pmby Jeffrey Wells 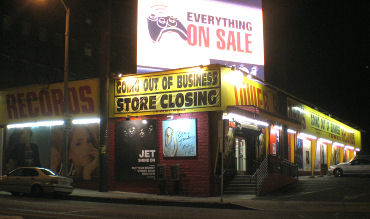 This is the end of an entire Sunset Strip mecca experience, a place that always felt like the epicenter of of L.A.’s music industry…until things changed.

It all started when greedy retailers started charging those ridiculous sky-high prices for CDs in the late ’80s and ’90s, which caused many of us to laugh with pleasure when people began to illegally download songs online. This is largely why Tower bit the dust — not enough kids are buying CDs because of the whole digital revolution. But if there was ever a case of justified commercial payback, it was the music industry gorging on CD profits in the ’80s and ’90s and then suffering from the rise of Napster and Limewire in the late ’90s and early 00’s…eat shit! Tower has been a mainstay since…what, the late ’60s? We’d all love to see Amoeba take over this space, but they’d have to jettison the store they have now adjacent to the Arclight to make it work. Wouldn’t they?

“Narrative has been a big poison of cinema. The narrative is not a good thing just to be attached to. It doesn’t free us to explore more images, metaphors, poetry. When you’re dealing with different subject matters that you want to address, it’s better to expand the possibilities. I have been fascinated always that the character is defined not only because of what he does but [how] the others around him affect him. We are defined by the others. In Latin American literature this kind of structure is a natural way to tell a story, so I’ve been influenced by that.” — Babel‘s Alejandro Gonzalez Innaritu speaking to AP’s Ryan Pearson.

There will always be outfits offering formulas and stratagems that will cut down on the risk factors in movie-making. A New Yorker article by Malcolm Gladwell is focusing on a a new permutation of this — a British- based company called Epagogix. If every producer and creative executive in this town were to embrace Epagogix, the effects upon the withered soul of Hollywood would be nothing short of demonic. And yet, to be perfectly honest, if I were running a studio I would probably take a look at it.
The principals are Dick Copaken, Nick Meaney and Sean Verity. They’re basically offering a “neural network” program that, in a Hollywood sense, counts cards at the casino. Their site says that Epagogix “works confidentially with senior management of major film studios to assist in identifying and developing scripts, and in transforming scripts with low box-office revenue potential into properties that can be profitably produced and distributed.”
“If you were developing a $75-million buddy picture for Bruce Willis and Colin Farrell, Epagogix says, it can tell you, based on past experience, what that script’s particular combination of narrative elements can be expected to make at the box office,” writes Gladwell. “If the formula says it’s a $50-million script, you pull the plug.”
The neural network, says Meaney, “can sometimes go on for hours. If you look at the computer, you see lots of flashing numbers in a gigantic grid. It’s like ‘The Matrix.’ There are a lot of computations. The guy is there, the whole time, looking at it. It eventually stops flashing, and it tells us what it thinks the American box-office will be. A number comes out.”
“The way the neural network thinks is not that different from the way a Hollywood executive thinks: if you pitch a movie to a studio, the executive uses an ad-hoc algorithm–perfected through years of trial and error–to put a value on all the components in the story. Neural networks, though, can handle problems that have a great many variables, and they never play favorites — which means (at least in theory) that as long as you can give the neural network the same range of information that a human decision-maker has, it ought to come out ahead.”

A couple of good hombres hook up, throw ideas around, it feels mostly right and things jell really nicely and three excellent films result. Then the usual headstrong egoistic stuff happens (harmony between willful types never, ever lasts) and things devolve and the guys eventually say to each other, “This isn’t working like it used to…time to move on” and they both do this and whatever happens on their separate journeys, happens. What…a… shocker!

“The title may throw some moviegoers, but it’s really quite profound. According to Webster’s, Babel is a confusion of voices or sounds. There are many different languages spoken here, lots of translation needed from one character to another. What unites them is a unifying voice, however. One which speaks universal truths in understanding the harsh realism of humanity.” — senior Variety editor Stuart Levine, writing on msnbc.com.