MSNBC’s Dave White begins his monstrous-movie-moms piece, naturally, with Annette Bening‘s diseased hell-hag in Running With Scissors (Columbia, 10.20). Based, naturally, on someone real and still living — book author Augusten Burroughs‘ mom — Deirdre Burroughs’ neuroses are so extreme and curdled she seems to be suffering from a kind of leprosy of the soul. She’s too much by my standards, but excessiveness, clearly, seems to be the point. Gay guys will probably wet themselves over Bening’s performance the way they went ga-ga over Faye Dunaway’s in Mommie Dearest . They’re both gargoyles for the ages. 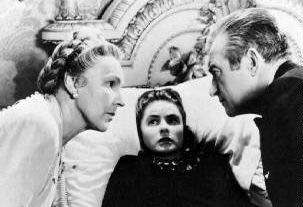 Because of my straight-guy affinity for personalities and performances of a more naturalistic leaning and partly because my maternal grandfather was German, my all-time bad mom trophy goes to Leopoldine Konstantin ‘s elfin Nazi housefrau in Notorious. (White mentions her but almost half-heartedly, lumping her together with Angela Lansbury ‘s mom in The Manchurian Candidate in the same graph.) Bad because she’s recognizably human, unlike Bening, and yet malevolent and willful and and always ready to pounce — a formidable spider.
That early-morning scene in the bedroom when Konstantin’s son Alex (Claude Rains) confesses that he’s just learned he’s married to an American agent (i.e., Ingrid Bergman) is her magic moment. The way she props herself up in her bed, takes a cigarette from a case, lights it…that look of scheming concentration. Alex mentions a colleague named Mathis who is “very sharp” and will spot what’s happening, and she answers, “Yes, he dislikes you. But his criticism of your talents wouldn’t go that far to imagine that you are married to an American agent. You are protected by the enormity of your stupidity. For a time.”