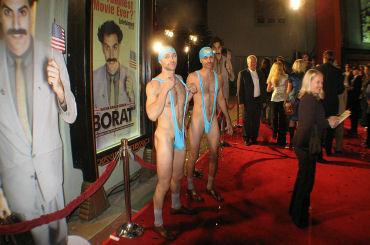 It was great to finally see Borat: Cultural Learnings of America for Make Benefit Glorious Nation of Kazakhstan (20th Century Fox, 11.3), even if it was on a very gracious, Russian-potato-line, second-class invitee basis.
Invited guests to last night’s premiere were made to wait in a totally non-moving line on Hollywood Blvd. last night for a very long while, and while it was hardly painful or humiliating — it was a nothing, a shrug-off — this sort of thing never happens at a premiere. The usual drill at any premiere is to walk up to will-call, get your ticket and go inside and grab a bag of popcorn. Nobody could figure out the delay but the general sentiment was one of vague irritation and “why?” And then we were kept waiting another half hour or so once we were in the theatre and seated.
Borat is fall-on-the-floor funny. Hilarious, outrageous, brilliant, diseased. It’s true about it being a slash-and-burn satire of American yahoo-ism. If red-staters are good sports they’ll laugh along with everyone else, but some devotees of the Pentecostal faith are probably going to have concerns. The mock anti-semitism is inspirational; I loved the throwing of dollar bills at the Jews disguised as cock- roaches. And the naked wresting scene is without question the single most appalling thing I’ve seen in a film in years. Make that decades. And thass okay! I like it!
Borat star-producer-writer Sacha Baron Cohen spent an hour (longer?) talking to electronic press people on the red carpet. Journalists like myself and the Holly- wood Reporter‘s Borys Kit and N.Y. Times reporter Sharon Waxman didn’t get to attend the premiere showing at the big Chinese theatre — we were shunted off to an upstairs theatre at Mann’s Chinese 6.
Variety reported that the plan was for Cohen “to be ushered into his preem by a phalanx of Kazakh locals bearing fruits and wonders of the country. Plans were for ‘Borat’ to be carried, bridelike, to the podium by an oversized woman. There, he would address the throng of press and fans and respond to a recent invitation to visit Kazakhstan, which has tried to disown Borat almost from the moment he claimed it as his country of origin.” 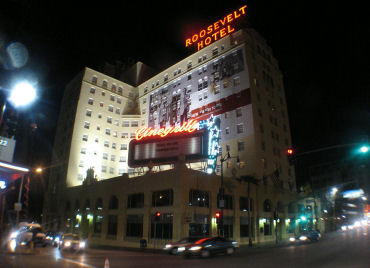