I decided last week that no matter how celebrated or shot at Leonardo DiCaprio‘s Blood Diamond performance turns out to be, he’s still a dead-serious, kick-the-door-down Best Actor contender for his work in The Departed…no question. His undercover state cop is so fierce and frazzled and emotionally strung out that it just clobbers any resistance you might have to the notion of an award-worthy performance coming out of a straight-ahead crime film. 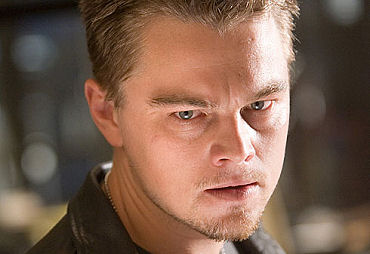 Forget whatever depth or resonance his character appears to have upon the pages of William Monahan ‘s script. DiCaprio adds layer upon layer of frazzled, hard-pavement emotionalism — uncertainty, anxiety, despair, loneliness…a haunted, kicking-around, terrified mutt-dog quality. He’s a guy who can’t be comforted or loved — one of the most permanently-alone characters I’ve ever considered in my life as an incorrigible movie hound. Like I wrote in my first reac- tion piece, it’s the best performance he’s given since Gilbert Grape . And that’s not saying enough.
I slipped into a 7:40 pm Departed showing at the Grove last Sunday. The sign above the ticket-selling kiosk said the sucker was sold out, but there were some seats in the front (there always are), and you could just feel the full-tank-of-gas feeling in the room as the end credits unspooled. And two days later along came this Scott Bowles USA Today story remindng everyone that The Departed is continuing to kick box-office ass (taking the #2 slot and beating Flags of Our Fathers last weekend) and rack up cred as a Best Picture contender.
When the idea of it being being Best Picture material was first being being floated, I said it was like The French Connection , which didn’t have anything profoundly thematic either but was celebrated for its raw, gritty-ass, only-in-New-York abrasions. The Departed doesn’t deal the same kind of cards, but is being celebrated for its tight and tasty Scorsese-ness, the ferocious story energy, the killer acting and cutting. But the award-worthy precedent-paradigm is The French Connection nonetheless, and I don’t think I have to argue this point any more — it’s obviously taken off on its own.