An okay-whatever N.Y. Times piece by Ginia Bellafante on Douglas McGrath‘s Infamous, which opened and closed this weekend. Warner Independent sealed the fate of Infamous last year when it made the decision not to open it last fall against Bennett Miller‘s Capote, which would have been a kind-of event — no one would have been able to see just one. That would have been the only chance it had. 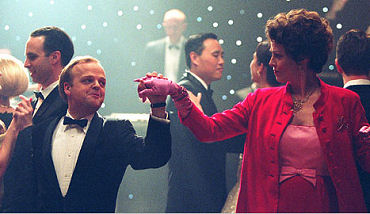 As it happened, people had no interest in seeing a second Truman Capote-writes-In Cold Blood film a year later, especially when the word began to get around that it had problems.
My opinion after seeing Infamous before the Toronto Film Festival was that it wasn’t nearly as rich and resonant as Miller and Dan Futterman‘s Capote pic. David Thomson‘s early-bird review, in which he called it close to miraculous and superior to Capote, was absolutely bizarre — and I think Thomson is brilliant. It’s obvious that Toby Jones looks more like the real Truman Capote than Philip Seymour Hoffman, but Philly is a much better actor. There are some major wrongos in the Infamous depiction of the Clutter murders. I don’t believe Capote dressed himself as a road-company cowboy in order to ingratiate himself with the Holcomb locals, as he does in McGrath’s film. I didn’t buy Daniel Craig (and the black dye he used on his hair and eyebrows) as Perry Smith for a second, and I don’t believe any of the physical stuff between Smith and Capote in McGrath’s film (including the kiss) actually happened.
If I were a Warner Independent distribution exec, I would gone out and taken a long walk after reading those Saturday morning numbers.