The last few months have cast Little Miss Sunshine in its proper light. When it opened last July following an ecstatic debut at the Sundance Film Festival six months earlier, nearly everyone called it one of the most original and emotionally grounded family comedies seen in a long while. Quirky and perky, sometimes despairing in tone but intimate and knowing — a movie with smarts and verve and finesse. 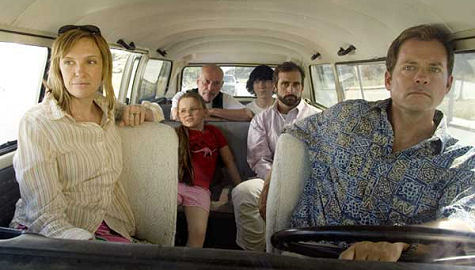 Sunshine, of course, has hung in there commercially over the last three months (it’s up to $57-something million domestic) and is now even more broadly regarded as one of the year’s absolute finest. Because, I believe, it’s not a hah-hah comedy as much as a down-to-the-marrow family drama with horse laughs, and because of the quality of the humor. It feels so cleverly configured and well-blended that it doesn’t feel like anyone configured or blended anything.
The lion’s share of the credit for this belongs to three people — screenwriter Michael Arndt and directors Jonathan Dayton and Valerie Faris. I’ve made no secret over the last nine months about being an Arndt fan for reasons that have nothing to do with our having swapped apartments during the summer of ’05. (I sweltered in Brooklyn while he worked with Dayton and Faris during the Sunshine shooting, which was all done within 50 miles of Los Angeles.)
< ?php include ('/home/hollyw9/public_html/wired'); ?>
Arndt has been living in San Francisco and working on a script for Pixar over the last year or so, but he was in town earlier this week and asked if we could talk. His agent has been riding him about sitting down with the right journalists to keep his Sunshine script in play for a Best Original Screenplay nomination. I think it more than speaks for itself but you have to play the game. We met last Tuesday night outside a Coffee Bean on Beverly and Robertson (it was just after the Oliver Stone/World Trade Center shebang at Morton’s) and talked for an hour.
Scene for scene, beat for beat, line for line, the Little Miss Sunshine screenplay is damn near perfect. In Arndt’s own view it deserved a grade of 88 before it was shot, and then the Dayton-Faris collaboration along with the inspired input of the cast kicked it up to a grade of 93 — a solid A. (Only scripts on the level of Some Like It Hot and Tootsie deserve grades in the high 90s, he feels.) 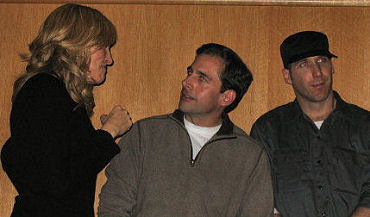 Arndt didn’t want me to take his picture so I didn’t. He feels that “writers should never have their picture taken for the same reason that models should never be interviewed.” But he’s got an appealing, interesting face — there’s a wariness in his eyes, but every now and then something joyful and delighted seeps in — so after some reflection I decided to run the above shot, which was taken at Park City’s Eccles theatre just after the Sunshine‘s debut showing. I’m presuming that he won’t be pissed.
To appreciate this recording you have to know Little Miss Sunshine pretty well, and you have to remember the actors (Abigail Breslin‘s Olive, Greg Kinnear‘s Richard, Paul Dano‘s Dwayne, Alan Arkin‘s grandpa, Toni Collette‘s Sheryl, Steve Carell‘s Frank) and all the stuff they go through.
If you haven’t seen Sunshine, it’s basically about two days or so in the life of the can’t-catch-a-break Hoover clan during a car trip from hell in which they’re taking little Olive to a Little Miss Sunshine beauty pageant in Redondo Beach.
It also helps to know that it took Arndt and Faris and Dayton about five years to get this film off the ground. Why I can’t imagine, but this anecdote in itself reminds me how blind and clueless mainstream Hollywood can often be. What if they’d given up? How many people with scripts as good as this one have grown weary and thrown in the towel after getting turned down for the 27th time? 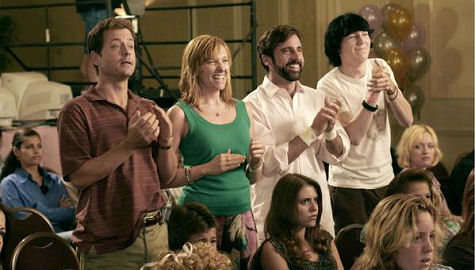 The Beverly Blvd. traffic was awfully noisy during our talk (trucks, motorcyles, sirens) so I was surprised that our conversation came out as clearly as it did. It lasts about 30 or so minutes, and has some very good stuff on it — trust me.