Some feel that journalists aren’t supposed to make before-the-fact suggestions. They’re supposed be good sheep and just eat the grass that’s in front of them ….baahh! But I’ve got one anyway, and I think it sounds pretty neat. I mentioned it to a fairly big wheel at Paramount the other day and he thought it was pretty cool also, so please give it a think-through.

My dad, a Marine Lieutenant who fought all through the battle of Iwo Jima, saw Flags of Our Fathers last weekend. He didn’t like it that much. The combat footage was bulls-eye, he said, but he didn’t care for the cutting back and forth between the battle and the war-bond tour. I was sorry to hear this on some level. I felt the same way but I thought his reactions might nudge me into a fuller appreciation of some kind. Lamentably, we were pretty much on the same page.
But after we spoke last night, I said to myself, “Wait a minute.” That idea I had three weeks ago about someone re-cutting Flags and blending it with portions of Letters From Iwo Jima came back, and the more I kicked it around the better it sounded.
< ?php include ('/home/hollyw9/public_html/wired'); ?>
Six months ago…hell, six weeks ago your two Iwo Jima films were looking super- formidable. Not so much now. I’m not saying this with any relish whatsover, but the fact is that the tent has deflated somewhat. Flags is a pretty good film for the most part and certainly deserving of respect. But a little voice is telling me something better and fuller can be made from the footage you’ve shot.
A clear majority of the venerated critical community has done cartwheels over Flags of Our Fathers and it’s entirely possible (though not certain) that it will land a Best Picture nomination, but it’s sagging commercially all the same, and, let’s face it, this will have an effect on Academy nominations. You worked hard and long on Flags and put your heart into it, but facts are facts. It earned $6,300,000 on 2100 screens last weekend, which is a drop of just over 40% from last weekend despite an addition of 300 screens. I can’t be the only one thinking that Oscar glory may not be in the cards. 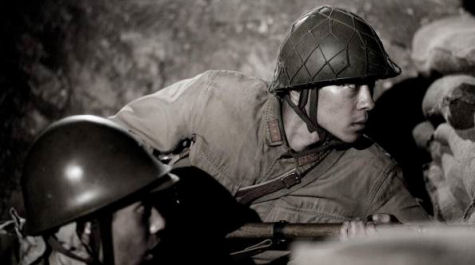 And Letters From Iwo Jima (Warner Bros., 2.9), a Japanese-troop POV drama about the same conflict, is being regarded by its handlers and marketers as a smallish art film — a sideshow. (There was a brief mention of it being offered to Sundance ’07.) I’m not saying it won’t be as widely admired as Flags; it may turn out to be even more so. But I’m sensing that however it’s received by critics, the industry and the paying public, it’ll be mainly regarded as a back-up maneuver. On these shores, at least.
My suggestion is this: sometime early next year go back to the Avid with your gifted longtime editor-collaborator Joel Cox (who cut Flags) and put together a third movie that willl be strictly about the battle of Iwo Jima — a new synthesis that will draw solely from the combat footage in both films, cutting back and forth between U.S. and Japanese troops.
It won’t even need a story. With experiences of this sort, “story” is over-rated. I’m thinking that the third film — rip off the title of that old John Wayne movie and call it Sands of Iwo Jima — could be a seriously kick-ass, impressionistic, here’s-how- the-battle-really-went-for-both-sides type deal.
The lack of a story will be a plus factor, actually — the terrible ragged honesty of the combat footage will be enough. That and the slamdunk theme, of course — the shared terror and common humanity between the U.S. and Japanese troops.

You don’t even need an “ending” to this film, or a beginning even. You just need to take us back there once again and just stay with the battle this time, and just let the raw truth of it soak in on its own terms.
In my Flags review I imagined that someone out there will someday take the DVDs of Flags of Our Fathers and Letters From Iwo Jima and recut them into Sands of Iwo Jima and put the finished product up on YouTube. I’m suggesting a recut third version because you should do it, not some kid from NYU film school.
Every director knows there’s no such thing as a final cut of any film — there’s only the version he/she has to settle for when it’s taken away by the distributor and duplicated into release prints. The deck can always be re-shuffled, and why not? We’re living in a fluid world of endless digital re-imaginings and alternate versions these days. And Flags of Our Fathers and Letters From Iwo Jima are your movies, your material. It should be yours to do or not do.
I’m not saying you need to commit to assembling and releasing a DVD of Sands of Iwo Jima. It may not work out. It may be a lousy idea. I’m saying you and Joel should at least try it and see what happens. If it doesn’t work, no harm done. But if it does, you’ll obviously be happy and satisfied that you gave it a go. And so will your fans.