The usual simplistic knee-jerk responses have flooded in since last night’s summary and posting of a link to Michael Fleming ‘s piece about Steven Soderbergh‘s plan to shoot back-to-back Che Guevara films as of May ’07. I ran a response in “comments” this morning, but just so everyone sees it… 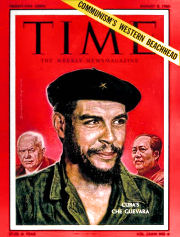 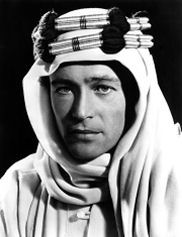 I gave this a think-through last night and came to the rudimentrary conclusion that The Argentine and Guerilla combined are are going to resemble parts I and II of Lawrence of Arabia — the promise, the dream and the mixed glory in the first section, and the bitterness, madness and despair that manifests in the second. Presumably there will be much more to these two films than what I’ve just summarized, but it took me just under 15 seconds to figure out the basic strategy — it’s fairly obvious — when I read Fleming’s story last night.
When the Soderbergh-del Toro-Guevara flick was just a single-film project (i.e., for the last several years), it was just Guerrilla — about how Guevara’s revolutionary fervor led him to quit his Cuban posts and embark upon a failed attempt to spark a revolution in Bolivia. It’s a story about failure, isolation…listening more and more to the sounds of your own rhetorical spinnings to the exclusion of real-world reality to the extent that it invites pathetic self-destruction.
As Christopher Hitchens once wrote, “Che’s iconic status was assured because he failed. His story was one of defeat and isolation, and that’s why it is so seductive. Had he lived, the myth of Che would have long since died.”
Because it’s largely about Che’s and Fidel Castro’s glory period (i.e., fighting and winning the Cuban revolution, which everyone marvelled at the world over…Batista’s allegiance was strictly with the moneyed elements who provided for him…he cared not for the poor), The Argentine will be about the hard climb up the mountain and then the reaching of the summit and throwing one’s hat in the air and dancing beneath the diamond sky with one hand waving free.
So The Argentine is the upper and Guerilla is the downer. Up the mountain, down the mountain. I doubt if Soderbergh, del Toro and Buchman will make the two films as black-and-white simplistic as this, but this is clearly the basic scheme.
Even the folks in charge of the withered Cuban propaganda ministry would have trouble framing Guevara’s Bolivian episode in a positive light. Give Soderbergh, del Toro and Buchman a break and assume, as any reasonable person would, that they’re certainly not going to attempt to glorify Guevara in part 2…no way. These are intelligent artists making this film. Show a little respect.
They’re primarily attracted to Guevara’s life for the arc that it represents (everyone of any spirit strives for something fine and shining in this world and some achieve it, and then the dream fades and the muddled, sometimes bitter reality kicks in), for the highs and the lows, to the Lawrence of Arabia angle. Because this is the story that will captivate audiences 100 or 500 years from now.