Three strongly worded reactions — an ecstatic rave, a thumbs-up and a pan — to David Fincher‘s Zodiac (Paramount, 1.17) went up on AICN today following Thursday night’s screening of a nearly-finished cut at Hollywood’s Arclight. 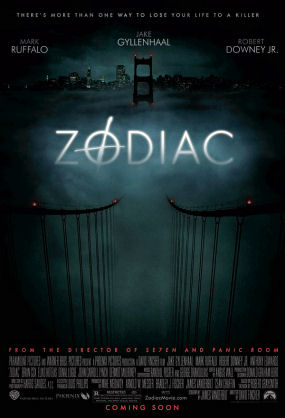 You can discount the wows or choose to regard them as plants, but it sounds at the very least like an impressively detailed and workmanlike policier coming from an early ’70s Pakula-type place. Given the building consensus that fall-winter season is looking weaker and weaker as we go along, it seems as if a limited December release of Zodiac would fill at least a portion of the void.
The ecstasy guy said he was “blown away,” called it “easily the best film I’ve seen this year,” “an instant classic”, “a great piece of filmmaking [and] easily one of the best films about an investigation I’ve ever seen.” The moderate admirer “didn√É¬¢√¢‚Äö¬¨√¢‚Äû¬¢t think it was quite as good as either Se7en or Fight Club” [but] says it operates in a kind of Pakula-type realm (All The President’s Men, Klute) and called it “a terrific film, one that I was long looking forward to…almost consistently compelling, suspenseful, and dramatically effective.”