Sometimes recordings don’t work out, like this one of a chat I had last Monday with Flags of Our Fathers Adam Beach at the Four Seasons hotel. Four loud guys in business suits sat down two tables away and started telling each other jokes, and I knew if we didn’t move right then and there the digital recording would be ruined. I should have suggested this to Beach, but I didn’t. I told myself those four loud guys weren’t so loud. Listen if you want, but it’s a little bit faint and echo-y at times. 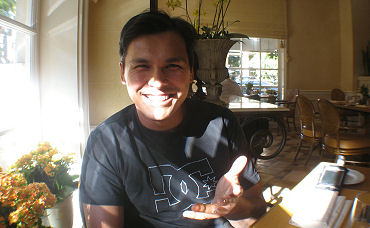 Beach is being talked up for a Best Supporting Actor nomination for his performance as Iwo Jima veteran Ira Hayes, who died fairly young from alcoholism. Clint Eastwood‘s film tells you one of the reasons Hayes turned to the bottle is that he couldn’t hack the hypocrisy of the war-bond tour while his buddies were fighting and dying in the Pacific, but I think Hayes was basically a guy with a huge alchohol problem that he couldn’t stand up to. I’m sure other things bothered or confused him, but he could have somehow dealt with them if it hadn’t been for the booze.
And yet Beach is playing the Eastwood interpretation — naturally. Not the saga of a problem drinker, but a guy with too big (or too weak) a heart and an inability to struggle through and play along. It’s a dark and aching performance — Hayes is obviously the guy you feel for the most for because he’s the most emotionally frail and upset. Clearly, Beach knows a thing or two about bitterness and cynicism. There’s authenticity in the hurt.
But about 40 minutes into our chat, Beach told me something fairly startling: when he was eight years old in 1980 and living in Manitoba, Canada, his mother was killed in a hit-and-run accident, by a car driven by a Native American who was drunk. (The guy was never really punished for what he did, Beach told me.) And then two months later Adam’s father, deeply distraught over his wife’s death and having turned to alcohol to anesthetize the pain, died also — an apparent case of suicide, or something close to that.
Here’s a guy, I said to myself, whose childhood life was shaken and ripped apart by two alchohol-related deaths, and then at age 33 he’s hired to play a guy whose life ended due to an alcohol problem — that’s pretty synergistic. On top of which is the compounded irony of he and Eastwood saying in interviews (as the movie says) that Hayes’ problem wasn’t about booze per se as much as Hayes being too emotionally susceptible and being unable to be a good p.r. guy or pretend to be something other than what he was. 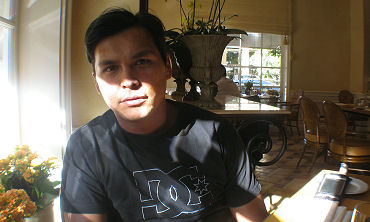 With Beach’s permission (and with Clint’s), I prefer the alcohol angle. It’s obviously more personal for Beach — disturbingly personal — and it ties in with the common belief that Hayes would never died and might have even had a shot at a half-decent life if it hadn’t been for the bottle.
All I know is, I’ve had a different view of Beach and his Flags performance since speaking to him three days ago. In hindsight, I think what he did was pretty remarkable. Fairly courageous, in fact.