Say what you will about Emilio Estevez‘s Bobby (Weinstein Co., 11.17), but it seems to have tapped into something fairly strong with the over-50 set. Or it did last night, anyway, when it screened at Pete Hammond‘s KCET class out at the TV Academy in North Hollywood. It was election night, of course, and perhaps people were reflecting back on those old Bobby Kennedy highs. Or maybe the movie just got to them. The crowd, in any event, really responded when the lights came up and Hammond introduced Estevez. 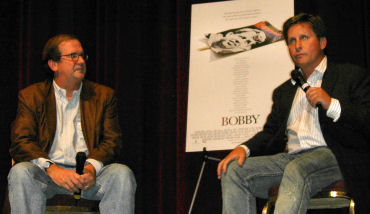 “It was the longest and strongest applause I’ve ever seen happen at this class,” Hammond told me earlier today. “When people greet a guest the applause usually goes 30, 40 seconds…usually less than a minute. This went on and on and on, and then everyone started to stand up. Very unusual. These are all upscale movielovers. I asked how many had voted and they all raised their hands.”
I never know to what extent a reaction like this is may be about things other than the film iself, but I remember what an exceptionally positive reaction Crash got when I showed it an older, well-heeled crowd at the UCLA Sneak Previews in the spring of ’05, and we all know where that one led. And we all know that a typical Academy member tends to fit the same profile — 50-plus, liberal, etc. So maybe this means something. Or not.