Fantasy — the kind geared to the women who read Cosmopolitan — is a very fundamental aesthetic in any Nancy Meyers film. Not just girly-girl fantasy, but historical fantasy as well. Case in point: a line in Meyers’ new film The Holiday (Columbia, 12.8) declares that Cary Grant came from or had roots in the London suburb of Surrey. The problem is that it ain’t so. I could be half-wrong and Grant may have lived in Surrey at one point, but I doubt it…and if I’m right, why would Meyers fabricate something about a famous actor’s life? 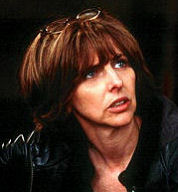 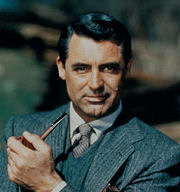 Grant was born in Bristol, England in 1904 and, according to biographers Marc Elliot, Charles Higham and Roy Moseley as well as his Wikipedia bio and an extensive web search I did this morning, never owned or rented a home in Surrey, much less “came from” there . He came from modest circumstances — Surrey is a nicely-moneyed bedroom community. Grant travelled to the U.S. with the Bob Pender troupe in 1920, and within a couple of years he was living in New York permanently. By 1930 or so, he’d moved to Los Angeles to try and brreak into movies.
It’s possible, of course, that Grant may have rented a Surrey home at some point and I just couldn’t find a mention of it. (I called Meyers’ office at Sony and asked an assistant to please pass along the inquiry, and of course a reply never came back — a contact at Sony publicity declined to return also.) But even if Grant stayed in Surrey for a brief period, that wouldn’t make him “from” there, which is what Kate Winslet’s character (a lovesick London journalist on holiday in Los Angeles) essentially says when she’s speaking to Eli Wallach‘s aging screenwriter character.
Winslet lives in a cute little home in Surrey — totally fake-looking in a Nancy Meyers way…a gingerbread, storybook house that’s been interior-decorated within an inch of its life, at the real-world cost of God knows how many tens of thousands of dollars, if not pounds. To get away from a rake (Rufus Sewell) she’s in love with, she swaps homes with a successful movie-trailer cutter (Cameron Diaz) , who’s also reeling from a soured relationship and looking to blow town.
If anyone knows of any substantial Cary Grant-Surrey connection, please advise.