A heartbreaking N.Y. Times story by Alex Mindlin about the closing of Movie Palace, a locally-owned Upper West Side Manhattan video store (105th and Broadway) that’s been run in a very neighborhood-friendly way by the same impassioned semi-ecentric, Gary Dennis, since 1984. The building has been sold and the new money-grubbing owner, a guy named Ralph Braha, more than doubled Dennis’ rent. And we all know the name of that tune. 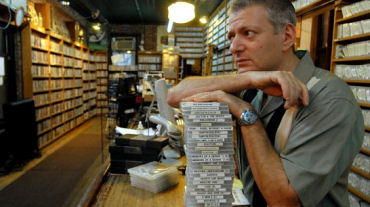 “Like the movie theaters that preceded them, video stores are fast becoming relics, and their signs may soon join those unlighted movie marquees (with a vestigial letter or two) that dot various neighborhoods and remind passers-by of what once was,” Mindlin writes.
“But the decline of the video store is more than a story of small merchants undone by technological change. Like movie theaters, and unlike delis or drugstores, video shops in a city as film-saturated and film-savvy as New York emerged as centers of neighborhood life. Their selections mirror the people they serve, and their proprietors, like Mr. Dennis, can be beloved figures with a deep knowledge not only of local inhabitants’ film tastes, but also of other aspects of their lives.
“Salvatore Ierardo, the liquidation director for Video One Liquidators, a Florida company that sells off video stores’ inventories on site, sees the deaths of these shops firsthand. The stores are like “the guy that used to deliver ice,” he said, adding, “He worked hard and everything, but the refrigerator was working while he was sleeping.”
“Compared with some other video stores, Movie Place has not fared badly. For years, it resisted the forces that have been sweeping away many of the city’s other mom-and-pop video shops. Nationally, the number of privately owned video rental shops, as opposed to huge chains, fell to roughly 13,000 in 2005 from about 22,000 in 1996, according to Tom Adams, president of Adams Media Research, which tracks the entertainment industry.”
In short, almost half of the individually-owned video stores have gone bust in the last 10 years. The killers are the big video-store chains, Netflix, video-on-demand. Bit by bit, lease by lease, the neighborly human element in the DVD-renting experience is being squeezed and starved.