In an 11.12.06 N.Y. Times story by Ross Johnson about Jerry Bruckheimer and Tony Scott‘s Deja Vu (Disney, 11.22), the details and background of an ultra-realistic explosion — one that was surely inspired on some level by the 9.11.01 Armageddon — are explained. 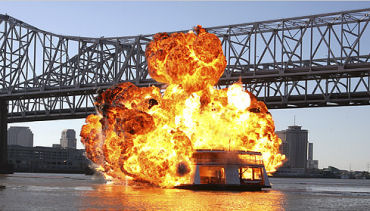 The World Trade Center explosions are specifically referenced in the following passage in Johnson’s story when Bill Marsilli, one of the film’s screenwriters, describes his reaction to the Deja Vu fireball: “I saw these incredible flames and I just burst into tears. My first thought was ‘My God, what have I done?'”
“As an aspiring screenwriter in September 2001, Marsilii stood on the corner of Sixth Avenue and Fourth Street, near his Greenwich Village apartment, and watched in horror as the World Trade Center towers fell. Having struggled to conceptualize Deja Vu since 1997, he stopped writing for a year after the 2001 terrorist attacks, he said. Eventually he returned to the story with another writer, Terry Rossio.”
Later in the story Johnson mentions the fertilzer and fuel-oil explosive used in the 1995 Oklahoma City bombing and compares it to the relatively benign explosives that were used in the film.
On 9.12.01, I wrote the following for a story filed from the Toronto Film Festival: “Those hundreds (more likely thousands) of bodies lying under the rubble in New York and Washington, D.C., have pulverized everyone’s consciousness. Reality has taken over completely. Reality is all. What happened yesterday was beyond horrific, beyond sadistic, beyond the most spectacular Jerry Bruckheimer CGI fireball.
“Those camcorder shots of the buildings crashing down were terrible but awesome. I watched them over and over yesterday and into the night. We all did, I’m sure. It sounds insensitive to even think this, but one result of that footage is that special- effects companies are going to have to get a lot better very quickly. That’s because any huge, computer-created explosion in any new movie is suddenly going to look a lot faker. Reality has raised the bar.”