No one seems willing to spit out the truth about Superman II — the Richard Donner Cut (Warner Home Video, 11.28), which is that it’s a so-so, patience- straining thing to sit through…at best. 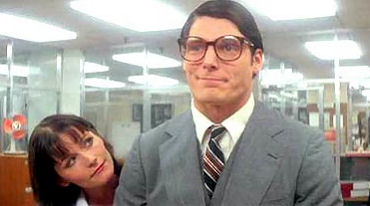 The ’81 theatrical version was shaped by the fact that Donner, who had directed the original Superman and a good portion of part II, was fired by producer Ilya Salkind and replaced by Richard Lester. So it’s theoretically agreeable that the film Donner wanted to make has been slapped into some kind of form. Original visions should always be respected, and the effort that went into this new DVD deserves a salute.

The problem is that Superman II was never that great a film to begin with, and now it feels like a lesser thing in nearly every respect. And the technical fact is that the Donner version feels only a step or two up from a YouTube re-edit.

Just because a fussed-over director’s cut version of a well-liked fantasy film has been cobbled together from this and that element — the re-assembly wasn’t done by Donner but a hard-working guy named Michael Thau — doesn’t mean it’s going to look all that good. Trust me, this one doesn’t. The film was originally shot almost 30 years ago, and it just doesn’t have the visual lustre of, say, the ’53 Invaders From Mars . It looks like it ‘s been lighted for a TV series** (the dps were Robert Paynter and Geoffrey Unsworth), and basically feels like a visual ho-hummer. The only thing that says it’s ostensibly an A-level effort is the presence of stars (Marlon Brando, Gene Hackman, Ned Beatty, Margot Kidder, et. al.).

The story (Superman gives up his powers in order to be Lois Lane’s lover, but has to reclaim them in order to battle three visiting Krypton baddies) was never more than servicable, and nows it just seems to plod along — there’s no zip in any of it. The amazingly tepid dialogue (written by David & Leslie Newman, Mario Puzo) is literally painful to sit through here and there. With the exception of Gene Hackman‘s Lex Luthor, the performances never seem to find any kind of groove. The late Christopher Reeve could be absolutely dreadful when he put his mind to it. And at times the 1977-’78 special effects seem almost Ed Wood-level. 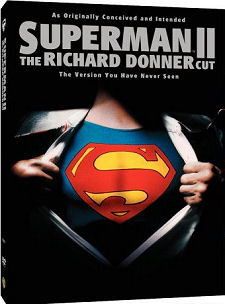 Warner Home Video reportedly laid out “big money” for the restoration, but they couldn’t even pay to have the wires (i.e., the ones that allow Reeve and others to fly around) digitally removed. This is vile inexcusable cheapskate-ism. This DVD deserves to bomb because of this one aspect alone.
It starts with the old beginning with Brando and the Krypton Elders Council condemning the three baddies — Terence Stamp, Jack O’Halloran, Sarah Douglas — for seditious acts, and then imprisoning them inside a kind of flying mirror. (It’s absurd that these unrepentant psychopaths would suddenly start whining and screaming once they’ve been mirrorized — watching this bit makes me twitch.).

But right after this comes a re-edited pedestrian montage sequence showing (a) the arrival of the baby Superman in a Smallville cornfield, (b) the progress of the flying mirror in space, (c) portions from the finishing moments from the first Superman film, (d) a nuclear device shattering the mirror so the baddies are freed, and so on. The kindest thing I can say is that it’s amateurish and third-tier. The word “embarassing” came to mind when I first saw it at a DGA screening two or three weeks ago.

I was intrigued by the extra Brando dialogue and footage. (It’s all basically Jor-El talking to his son in the North Pole palace via memory crystals and advising him not to be foolish by giving up his powers, etc.) The pro-level digital recreations and tweakings represent a lot of good solid work. And there’s an amusing Superman- hoodwinks-Lois sequence inside the Daily Planet building that kind of works. (With one exception: It finishes with Clark Kent and Lois Lane talking to each other — he standing in the Daily Planet offices and looking out a window, and she lying in a mess of squashed fruit and vegetables on the street below. Maybe 15 or 20 stories below, I mean. And they can hear each other.) 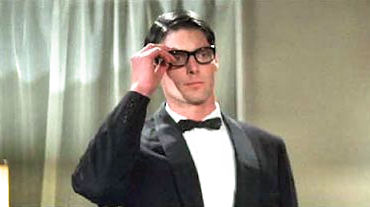 I hated the decision to have Superman reverse the earth’s rotation a second time (he does this at the finale of Superman also) in order to turn back the clock. He’s admitted to Lois that he’s actually Clark, so he needs to erase this moment of full disclosure so she’ll never be able to betray him. Heartening, no? On top of which the reverse-time thing means that everything that’s happened in the story…forget it. I don’t want to waste the time, but this is lazy plotting and poor thinking — almost on the level of Stranger Than Fiction.

At one point Thau uses test footage of Reeve and Kidder in a Niagara Falls hotel room to complete a scene that had been written for the Donner version but never finished. This means that some shots show a skinny Reeve with slicked-down hair and some show him looked bulked up with styled, fluffier hair. This makes the back-and-forth cutting seem…well, quizzical. Obviously amateurish, takes you out fo the film, etc. So why do it?

Thau did the best job he could with the materials he was able to find and put together and within the budget he was handed, but the final result simply isn’t good enough. Not even close. I’m sorry but that’s the truth.

** compare Paynter and Unsworth’s drab Superman II photography with Peter Suschitzky‘s for The Empire Strikes Back, which was released the year before. There’s no comparison. Suschitzky’s work is more carefully lighted and polished, and a lot more moody and varied.