Entertainment Weekly‘s Steve Daly has been shown Dreamgirls (DreamWorks, 12.15) and has seen “some arresting stuff,” he proclaims. But he doesn’t explain in great detail what stuff he’s talking about. The piece is basically a blah-blah tap dance that delivers almost nothing. In terms of what we want to hear, I mean. 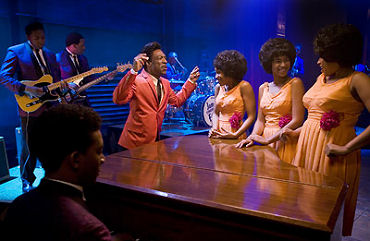 There are two minor chickenshit reveals. Daly writes that Beyonce Knowles is “resplendent in a disco-era silver-lame cape and long, corkscrew-curl wig.” He also says costar Jennifer Hudson kicks splendid ass. Daly declares that “judging from an early look at Dreamgirls, director Bill Condon ‘s “crash course [with Hudson]” — goading her into some flamboyant attitude and bitchy behavior — “worked spectacularly well.”
And that’s all. The world is hungering for a seasoned, sophisticated opinion about a film Daly knows full well is being looked to as the last possible hope for a Best Picture slam-dunk (or not) and he all he can do is give an “attagirl!” to Hudson and describe Beyonce’s gown and wig.
No other observations, anecdotes or judgments are rendered about the finished film. Too early, I guess. (Even though it’s being shown to the world starting this Sunday.) The rest of the story is all backstage stuff, and it’s not that arresting.