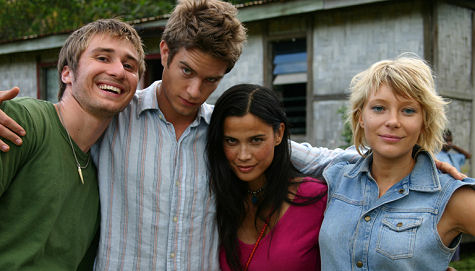 It’s been shown to foreign buyers at the American Film Market and, I’m told, has been sold in virtually every last territory; only U.S. distribution has yet to be finally settled. Warner Bros. wanted it; ditto Fox Atomic. Now it’s looking like an MGM distribution deal via Bauer-Martinez…probably.

Jungle is an unusually gripping variation on a kids-in-peril movie (the actual name of the genre is “kids visit an exotic and creepy climate and are soon in deep shit“). This is because of the raw non-staginess of it, the realistic atmosphere, the non-actorish acting, the hand-held photography, and the seemingly authentic locales. (It was shot in Fiji’s central highlands on a relatively lean budget with a no-name cast.) You can taste the moisture and the earthy-leafy jungleness all through it, but especially in the second half. Which jacks up the fear factor once the uh-oh stuff happens.

It’s very hard to make a decent film about young kids dying horribly with any real originality, but I swear this one has an “extra” element that really and truly sinks in. In some fundamental bone-marrow way I was affected. I believed it the way I believed Blair Witch seven years ago, and a lot more than I believed the mayhem in the dozens of films I’ve seen along these lines. 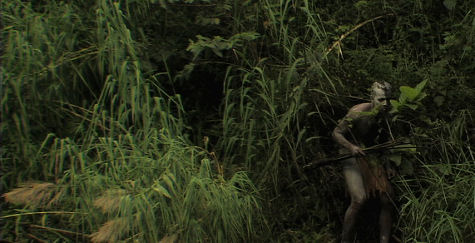 It feels way more chilling than Severance, for instance, because it feels like much more of a serious atmospheric immersion and in no way goes for laughs, and avoids the mode of a “theatrical” film. It’s one of those you-are-there deals that feels random and off-the-cuff and au natural.

Welcome to the Jungle has been directed and written by Hensleigh (The Punisher) with the actors speaking improv-y, non-scripted dialogue, in keeping with the form. The general inspiration on some level is Ruggero Deodato‘s Cannibal Holocaust (1979).

Four twentysomethings — a selfish couple played by Veronica Sywak and Nickolas Richey, and a somewat nicer, more compassionate couple played by Sandi Gardiner and Callard Harris — meet up in Fiji and then make their way to New Guinea with information about how to find Rockefeller’s possibly eaten and digested remains. (Legend has it that cannibals got him during an anthropological expedition to New Guinea in 1961.)

I had some problems with a quickie review by Fangoria‘s “Ryan Rotten” that ran on Friday, 11.3. He approved of the horrific cannibal stuff (which is sublime as far as this sort of thing goes) but delivered some questionable judgments.
“Ryan” said most of the action is set during daylight…bullshit. There are at least two if not three scenes shot in darkness. He said it carries “that same sickening visual style that will make those prone to motion sickness retch”…nope. (Did Lars von Trier‘s camerawork in Dancer in the Dark give you problems? It didn’t me.) 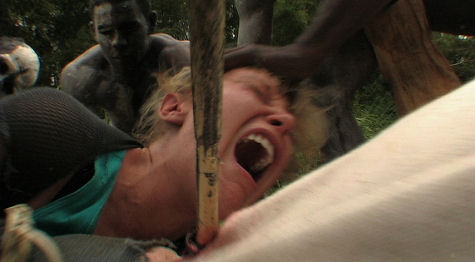 He also said that “the leads are a painfully unlikable lot who test the patience of each other as well as the audience with their incessant bantering.” He wants dialogue by Jean Anouilh? We’re talking relatively shallow GenY knockabouts here. In this case “inane” fits. In any case taking one’s time before getting to the blood is a way of getting the audience to invest in the reality of what’s happening and who these people are.

Welcome to the Jungle was shot in two weeks with an eight-man skeleton crew. It was shot in Namosi, known to some as a “sacred’ town in Fiji’s highlands in which cameras have never rolled film. Hensleigh needed permission to shoot from a local chief, and got that permission, he told me, by observing local etiquette and crawling across the mud floor of a tribal “bure” to perform a genuflection (kissing of feet) ceremony for a tribal elder.

Sywak, a 21 year-old Australian who’s great at playing saucy/snappy/spunky, is the keeper. Whatever “it” is, she’s got it. Hensleigh told me that ICM’s Jeff Berg is either trying to sign her or already has. The latter, probably.