The Envelope‘s Tom O’Neil is reporting that in lieu of the near-collapse of Flags of Our Fathers, both commercially and as an Oscar contender, Warner Bros. and the Clint Eastwood team have rethought their Letters From Iwo Jima game plan and decided to release it in late December after all, which obviously puts it into the Best Picture Oscar competition. Technically, I mean.

They’re doing this not just because Flags is all-but-dead as a Best Picture contender, but because it’s a weak year all around and how can a Letters entry hurt at this stage, all things considered?
“Warner Bros. will give it a qualifying run in a few Los Angeles and New York theaters during the last week of 2006, O’Neil wrote earlier today, “[and] then open it wide in February after Oscar noms are announced.” He added that it “isn’t known if Iwo Jima made last Friday’s cut-off for Golden Globe eligibility. So far the Hollywood Foreign Press Association has not responded to our inquiry.”
I got no help from Warner Bros. publicists this evening, but I’ve been told by an excellent source that the new Letters plan is indeed in place. Letters From Iwo Jima was officially booked a few days ago into select indie-type venues, I heard tonight. It’s been characterized all along as an art-house film, so that fits.
In my mid-October Flags of Our Fathers review, I wrote that in light of the weak- ness of Flags, “the Japanese movie is going to save the situation or not. It would be better, Oscar-wise, for it to be released this year instead of just Flags of Our Fathers on 10.20. 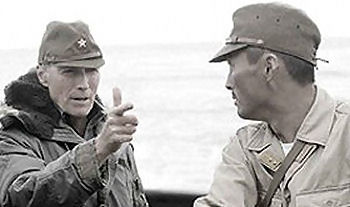 “Letters From Iwo Jima may or may not be the movie that turns the situation around, but I know this: Flags of Our Fathers doesn’t have a powerful right hook and doesn’t even box all that well, and even with the aura of this being Clint’s latest and all, I’m not sure its even going to wind up as a Best Picture nominee.
“So let’s hear it from the other team. This year, I mean. Because right now the only thing that will save matters is a Hail Mary pass.”