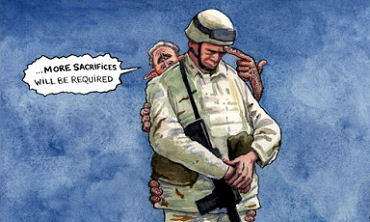 Today — Sunday, 11.26.06 — “marks the day that we will have been in Iraq longer than we were in all of World War II,” he begins. “That’s right. We were able to defeat all of Nazi Germany, Mussolini, and the entire Japanese empire in less time than it’s taken the world’s only superpower to secure the road from the airport to downtown Baghdad.
“And we haven’t even done that. After 1,347 days, in the same time it took us to took us to sweep across North Africa, storm the beaches of Italy, conquer the South Pacific, and liberate all of Western Europe, we cannot, after over 3 and 1/2 years, even take over a single highway and protect ourselves from a homemade device of two tin cans placed in a pothole. No wonder the cab fare from the airport into Baghdad is now running around $35,000 for the 25-minute ride. And that doesn’t even include a friggin’ helmet.
“Is this utter failure the fault of our troops? Hardly. That’s because no amount of troops or choppers or democracy shot out of the barrel of a gun is ever going to ‘win’ the war in Iraq. It is a lost war, lost because it never had a right to be won, lost because it was started by men who have never been to war, men who hide behind others sent to fight and die.
“There are many ways to liberate a country. Usually the residents of that country rise up and liberate themselves. That’s how we did it. You can also do it through nonviolent, mass civil disobedience. That’s how India did it. You can get the world to boycott a regime until they are so ostracized they capitulate. That’s how South Africa did it. Or you can just wait them out and, sooner or later, the king’s legions simply leave (sometimes just because they’re too cold). That’s how Canada did it.
“The one way that doesn’t work is to invade a country and tell the people, ‘We are here to liberate you!’ — when they have done nothing to liberate themselves. When tens of thousands aren’t willing to shed their own blood to remove a dictator, that should be the first clue that they aren’t going to be willing participants when you decide you’re going to do the liberating for them.
“A country can help another people overthrow a tyrant (that’s what the French did for us in our revolution), but after you help them, you leave. Immediately. The French didn’t stay and tell us how to set up our government. They didn’t say, ‘We’re not leaving because we want your natural resources.’ They left us to our own devices and it took us six years before we had an election. And then we had a bloody civil war. That’s what happens, and history is full of these examples. The French didn’t say, ‘Oh, we better stay in America, otherwise they’re going to kill each other over that slavery issue!’
“The only way a war of liberation has a chance of succeeding is if the oppressed people being liberated have their own citizens behind them — and a group of Washingtons, Jeffersons, Franklins, Ghandis and Mandellas leading them. Where are these beacons of liberty in Iraq? This is a joke and it’s been a joke since the beginning. Yes, the joke’s been on us, but with 655,000 Iraqis now dead as a result of our invasion, I guess the cruel joke is on them.”