For months I’ve been feeling that former FAA bigwig Ben Sliney, who plays himself in Paul Greengrass‘s United 93, should be regarded as a Best Supporting Actor contender. It’s a minority opinion, okay, but New York Post critic Lou Lumenick is an ally. And there’s a lot more merit to this suggestion than you might think at first. 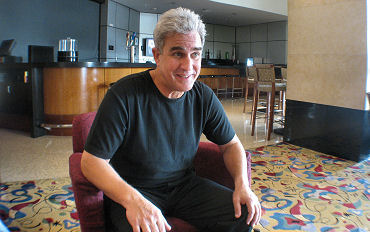 Sliney does a lot more in this superb film than play himself, and he does more than just “behave.” He exudes a mixed-bag thing that boils down to three quan- tities — trust, concentration and plain-spokenness. A Boston-area native and a former Manhattan attorney who lives in Long Island (about a half hour out of town), Sliney sends out decency signals like a radio tower — a certain can-do affable- ness. He’s Joe Pesci without the manic edge. He’s Jack Warden in the ’70s and ’80s, only less actor-ish. He’s James Gleason. (Very few readers know who Gleason was, I’m guessing, but he was the boxing manager in ’41’s Here Comes Mr. Jordan.)
Sliney is a soother character. As soon as he appeared in United 93 and started talking, I said to myself, “I like this guy…he’s part white-collar, part blue-collar.” A lot of actors know how to summon the skill to project this quality, but very few seem to be actually be it. Sliney’s United 93 performance is a little like Harold Russell‘s in The Best Years of Our Lives, only he seems smarter and more confident.
I met hundreds of meat-and-potato guys like Ben Sliney when I lived in Manhattan in the early ’80s, and there ought to be more of them in movies.. Because they’re life-like in a familiar, vaguely comforting sort of way. And you can’t beat that last name. “Sliney” is the kind of name would-be actors always drop when they decide to try to get into the business. It’s a name like “Smucker.” Worse, actually.
I just saw Nancy Meyers‘ The Holiday the other night, and it’s all about big stars putting on acts that you don’t believe. (Jack Black is the only genuine presence among the four leads — Eli Wallach and Ed Burns are very good in supporting roles.) Ben Sliney may not be an “actor,” but he projects more humanity, warmth and natural charm in United 93 than Cameron Diaz, Jude Law and Kate Wins- let do in Meyers’ film. 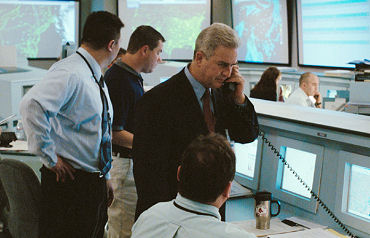 Another guy Sliney reminds me of is marketing guy Tom Sherak, who used to be a vice-chairman at 20th Century Fox and then a top dog at Revolution Studios. Sherak spoke before a class that I moderated back in the mid ’90s, and people liked him right away for the same reasons. Because he talks like a working-class guy and doesn’t put on airs, but at the same time is obviously brilliant and shrewd and a gentleman.
I spoke to Sliney late this morning in the lobby of the Rennaissance Hotel. We began by talking about computers and how he learned to “act” as a trial lawyer. I don’t have to summarize our chat — it’s all there. Here’s the mp3.
Message to agents: this guy really has something and is jazzed enough by his United 93 experience to maybe act again. Message to Academy: in his own unforced, unassuming way, Sliney is just as good in his film as Adam Beach is in Flags of Our Fathers , Jack Nicholson in The Departed, Brad Pitt in Babel and and Steve Carell and Alan Arkin in Little Miss Sunshine.
And he’s better than Eddie Murphy in Dreamgirls because he has more of a lived-in quality than Murphy (who “acts” all through it) and because he never drops his pants.