Catherine Hardwicke‘s The Nativity Story (New Line, 12.1) has screened this week and will junket this weekend, and I’ve been told “it’s a very nicely made Christmas movie…it’s one of those films that The Passion has begotten and is clearly aimed at the audience that loved that film. It definitely delivers a traditional spiritual capturing of Christmas, which is something Hollywood rarely does.” 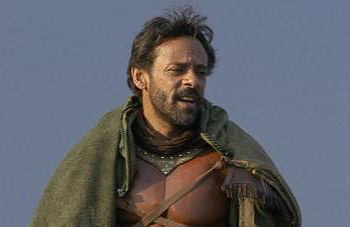 He’s saying, in other words, that it’s sweeter (his first term was “more sugar coated’) than, say, Martin Scorsese‘s The Last Temptation of Christ. “It’s very well made but it’s definitely not dark or plain…it’s more traditional,” he says. Meaning it’s fairly literal-minded in terms of the Biblical iconography. The film stops short of what director William Wyler did in his depiction of the Nativity scene in Ben-Hur, which was to have a moving star literally travel across the heavens and then stop and beam a kind of spotlight down upon the manger, “but it has a lot of shots ot the heavens with Bibilical connotations.”
He says Hardwicke even plays one of the familiar Christmas hymns — he couldn’t remember if it was “O Little Town of Bethlehem” or one of the others — on the soundtrack as Mary and Joseph (Keisha Castle Hughes, Oscar Isaac) make their way to Egypt.
I was intrigued to learn that Alexander Siddig, the North African-born, English- educated actor who was very fine in Syriana and Kingdom of Heaven, plays the angel Gabriel in Hardwicke’s film. A friend who’s seen The Nativity Story thought he might be playing God since he isn’t identified as Gabriel — he doesn’t introduce himself and he’s not carrying a brass horn of any kind — but the IMDB says he’s playing Gabriel so let’s go with that.
Floating and (naturally) ethereal, a bearded Siddig appears before Mary and Joseph toward the end to explain the basic divinity-of-Jesus plan, the virgin conception, what’s literally to come. This news is profoundly comforting to Joseph, who’s been clueless and confused up to this point.
Mike Rich‘s screenplay for the film was originally called Nativity — obviously a simpler, cleaner title. I wonder what genius-brain producer or New Line exec suggested adding the “The” and “Story”, and what his/her reasoning might have been?