TomKat’s wedding — a gala affair that happened yesterday inside Odescalchi Castle in Bracciano, Italy — reportedly cost a whopping $2.5 million. It seems a wee bit harsh for a N.Y. Post story to report that Tom Cruise and Katie Holmes “pledged to live a wacky life of Scientology“..but the fact is that the ceremony was carried out by a Scientology minister, and that the secretive David Miscavige, the top dog in the Scientology church heirarchy, was Cruise’s best man. I love this shot of early evening fireworks in the wake of a huge afternoon rainstorm….nice. 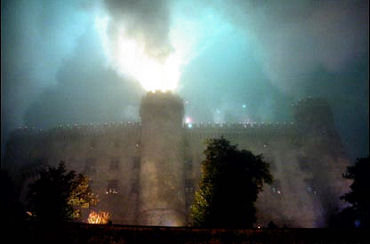 And this graph from the Post story totally cracked me up: “The bride had an escort of security guards dressed in medieval uniforms — all of whom had been given strict orders to have ‘a shave, haircut and sunlamp session‘ — and a roll of drums played as she entered the former stable where they exchanged vows.” I wonder if the instructions included specifics about minimum sunlamp exposure time, and if the guards were asked to submit to a full-body sunlamp exposure or if it was just a face-and-neck thing.
If I were running the Cruise-Holmes nuptials I would have further insisted that the guards have enemas beforehand. For years Miss Manners has recommended enema treatments — — a measure ensuring that one’s appearance will exude the ultimate natural healthy glow — for all guests, family members, caterers, guards. In fact, I would have arranged for a team of enema specialists to be flown over so their services could be provided gratis to the guests.