Patrick Goldstein‘s annual “early betting line” column about Best Picture contenders gives the best odds (4-1) to Dreamgirls. His only qualifier is that “its chances of a best picture victory depend on whether the academy, which has a soft spot for showbiz stories, will embrace a crowd-pleaser that isn’t daring or original. In other words: Does the soul outweigh the schmaltz?” 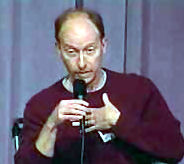 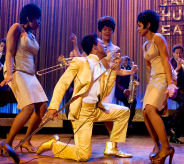 Goldstein doesn’t mention the well-known fact that there are some out there — maybe a few, maybe a lot — who are foursquare against Dreamgirls. A Manhattan publicist told me last night there are a lot of people “in the closet” about it — they don’t like it but don’t feel secure enough to go up against the gay media-industry mafia by saying so with any conviction.
I’m mixed on Dreamgirls — I like the pizazzy song-and-dance stuff but feel it zips along too fast and that there ‘s not enough emotional particularity or undertow, and that it lacks connective story-telling tissue. But for me, it’s not Chicago or Munich — if it wins I’m okay because the parts of it that I genuinely admire are fairly kick- ass, and because director Bill Condon has delivered genuinely admirable work in the past (Kinsey, Gods and Monsters) and will again.
The other thing that Goldstein omits is another awesome foreign-language Best Picture contender besides Pedro Almodovar‘s Volver. I’m referring, of course, Florian von Henckel Donnersmarck‘s The Lives of Others. I’m sorry, but Goldstein not even mentioning this film as at least a very long shot seems like dereliction of duty.
There is no avoiding the fact that this Sony Pictures Classics release has the the stuff that penetrates and lifts up and lasts — a riveting paranoid thriller, two kinds of love stories, superb acting (Ulrich Muhe, Sebastian Koch, Martina Gedeck), tangy adult sexuality and a truly stirring finale. I’m pretty cynical about the Oscar race, but is any aspect of the Best Picture race about nominating those films from whatever nation and spoken in whatever language that really and truly knock your socks off? If so, there is simply no way to keep Others out of contention.
Goldstein gives lousy 18-1 odds to Volver. “If there were ever an endangered species in the best picture race, it’s the foreign film, which, like animation, has been ghettoized in a separate but not equal category,” he says. “Sony Pictures Classics has made a big push for this…film, but it doesn’t look to have the depth of support needed.” No depth of support for one of the all-time great Pedros? Is everyone on Ritalin?