I didn’t exactly take part in this morning’s round-table interviews at the Waldorf Astoria this morning for The Good German (Warner Bros., 12.15); “sat in on” is more like it. I wasn’t feeling the moxie for some reason. But at least I recorded a couple of lively, light-hearted interviews with George Clooney and Cate Blanchett. Amusing machine-gun stuff, some of it informative and even thoughtful. 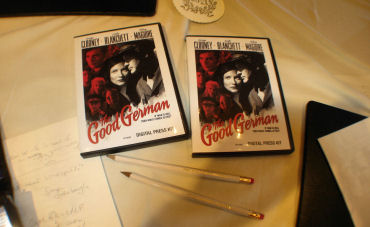 You need to be on-your-toes to get a question in edgewise at a typical session, which usually happens around a table-clothed round table that seats maybe 9 or 10 journalists. It’s always about nail-gunning your question at just the right instant (i.e., just as the celebrity is saying the last couple of words of the final sentence of his/her reply). This time,however, the interview tables were at least 30 feet long — Henry the VIII banquet tables — with maybe 20 or 25 journalists firing questions at the “talent” — Clooney, Blanchett, director Steven Soderbergh, screenwriter Paul Attanasio. And the competition was extra-fierce.
Clooney always delivers at these things. He’s going to be the same glib and grin- ning smoothie for the next 20 or 30 years — always between-the-lines thoughtful, never giving you a tape-recorded answer, never inconsiderate…the self-effacing hyphenate. Soderbergh and Attanasio were fine (and I don’t mean that to sound dismissive). But Blanchett was extraordinary. Honestly? I stared at her more than I listened.
It’s obvious within a minute or two that she’s living deep in her own realm. One with little electric cracks of lightning. She looks down and does little fidgety things — pulling her weddng ring on and off, drawing a doodle on a note pad — when she’s listening to a question. It’s not that she’s shy or avoids eye contact, but a lot of the time she talks to the tabletop or her eyes dart around as she’s answering. (Always a mark of a fine creative mind.) Plus it’s been a while since I’ve heard her native Australian accent. She’s done so many different accents recently she could be channelling the Meryl Streep of the ’80s. 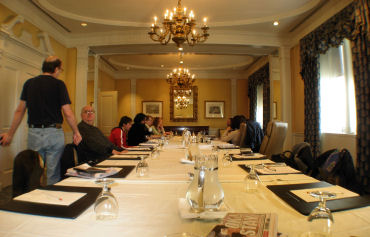 The longest table I’ve ever sat at for a group interview in my life — I was rescued from the far end by a kindly Warner Bros. publicist and put into another room.