Lane on Gabler on Disney

To New Yorker film critic Anthony Lane, writing about Neal Gabler‘s “Walt Disney: The Triumph of the American Imagination” (Knopf; $35), the most striking aspect of Snow White and the Seven Dwarfs “is the macabre punch…the poisoned apple rolling from the outstretched hand, the witch transfigured from a snotty Joan Crawford figure to something yet more disturbing. 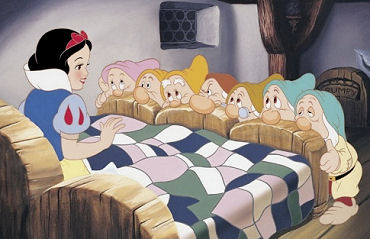 “As for the sight of the threatened girl haring through the forest, pursued by a posse of swirling leaves, with the branches clawing at her clothes, it possesses not just the sharp-toothed, half-Teutonic atmosphere that Disney could reliably conjure from his artists; it is also edited with a violent sophistication that chops straight into children’s dreams. For a moment, it looks like Eisenstein.
“It is no surprise, then, to learn that the director of Battleship Potemkin and Ivan the Terrible was a Disneyphile. “The work of this master,” Eisenstein claimed, “is the greatest contribution of the American people to art.”