My sons and I saw Children of Men Wednesday night inside a packed theatre at Leows’ Lincoln Square cinemas, but before I get into reactions I need to point out once again that the sound in the smallish theatre in which this Alfonso Cuaron film was playing sucked — nothing close to the super-robust, room-filling, razor-sharp sound I heard in Westwood’s Village theatre at the Children of Men premiere several weeks ago. It was muffled and down at least two volume notches too low. 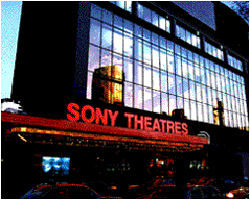 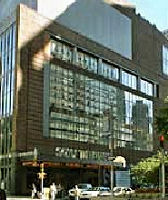 Beware of the sound in the right-rear shoebox!

Naturally, I got up and found the manager and asked him to please turn it up at least two notches. I went back in and the sound had come up slightly, but it still felt kind of weak. As I was thanking the manager guy for listening and responding as he did, he said, as all managers inevitably do, that my request was isolated and that most of the time people ask him to turn the sound down.
Why has each and every theatre manager I’ve ever spoken to about sound levels said the exact same thing? Why is the sound always perfect when I watch a film an an all-media screening in New York or Los Angeles (or when I go to any paid-ticket show at the Arclight or at Mann’s Village or one of the other high-end theatres), and why is the sound always a little weak and indistinct when I see a film in that smallish rear-shoebox theatre at the Lincoln Square? I had the same problem when I saw Match Point in the same space during the summer of ’05.