Correct me if I’m wrong, but the thrust of Craig Modderno‘s 12.3 N.Y. Times piece about the Best Supporting Actor buzz around Dreamgirls costar Eddie Murphy can be summed up as follows: (a) “Talk” of Murphy’s performance as James Early, a James Brown/Otis Redding-type soul singer, is kicking around on the hot-shot journo circuit, but (b) Murphy might not win because he’s known among some of his industry peers to be a bit of an asshole (stuck up, pissed off,won’t do press). 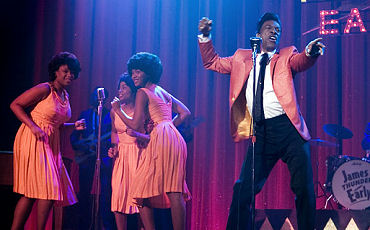 The people I’ve spoken to feel the performance is Oscar-worthy because of the vigor and stage-performing panache Murphy brings to Bill Condon‘s musical. I agree without question: Murphy’s is very winning as far as that stuff goes. It’s the spunkiest and most appealing thing he’s done in years. But the bottom-line truth — which Modderno decided not to mention — is that James Early barely exists as a developed screen character. Take out Murphy’s performing scenes and the ones in which he’s playing the tour-bus seducer, and what’s left is just a notch or two above a cameo.
Winners of supporting actor Oscars usually win because they’ve delivered at least one emotional paydirt moment (i.e., Beatrice Straight ‘s breakdown scene in Network). I challenge anyone who’s seen Dreamgirls to point out to me what Murphy’s paydirt scene is in that film. He doesn’t have a this-is-who-I really-am James L. Brooks scene, or a Cameron Crowe I-finally-know-where-I-need-to- go-with-my-life scene. Early is all about layin on the charm and puttin’ the song over on stage…along with a scene or two of despondency toward the end.