Jennifer Holliday, 46, the original “Effie” in the Broadway production of Dreamgirls, is whining to L.A. Times writer Greg Braxton that she isn’t getting enough coattail action off the forthcoming movie version, and that there’s too little respect/acknowledgment from the filmmakers and publicists behind the Dreamamount film. Gee, that’s tough. 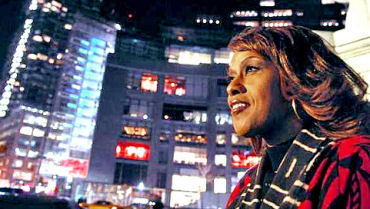 There’s a reason that Holliday, 200 pounds lighter than she was during the original play’s run, sounds like only a slightly tamer version of the well-known handful she was 25 years ago. She’s older and presumably wiser, but let’s face it — leopards don’t change their spots.
“She has worked steadily over the years but has never come close to matching her glory days as Effie,” writes Braxton. “Post-Dreamgirls,Holliday’s professional career and personal life could produce enough material for several Broadway shows: A suicide attempt at 30. Bankruptcy. Two failed marriages. Bouts with clinical depression.
“She dropped out of the public eye for years, drawing a startled reaction when she showed up in 1997 — 200 pounds lighter due to gastric bypass surgery — on Ally McBeal in a recurring role as a choir director.
“Although Dreamgirls has not had a major stage production for more than 20 years, Holliday said she had been the only one keeping the torch burning, performing ‘And I Am Telling You I’m Not Going’ at the private parties, corporate dates and engagements at gay nightclubs that have been her key source of income.
“Why is it necessary for them to wipe out my existence in order for them to have their success?” Holliday says of the Dreamamount team. “It’s scary that they can be so cruel. I know it’s business, but why do they have to go to this extreme? I’m a human being. I need to work too. Why do I have to die to make them a winner?”
“Some speculate that the filmmakers fear that comparisons to Holliday may dull the glow surrounding the performance of Jennifer Hudson, the former American Idol contestant who plays Effie in the film. Hudson has been considered an early favorite for an Oscar nomination.
“Wrote New York Post columnist Liz Smith: ‘Life is imitating art now. Jennifer Holliday, who was so incredible onstage in Dreamgirls as the original Effie, has incurred the wrath of Paramount for being uncooperative and not helpful in publicizing the movie. Word came down to omit any photo of her from the publicity for the movie version.’
Holliday “lives in Harlem and admits she is a bit of a recluse — she doesn’t go out much, doesn’t have a cellphone, doesn’t do e-mail,” Braxton relates.
“She is a ferocious reader of newspapers and magazines, loves courtroom shows on TV and watching movies — primarily musicals — until the sun comes up (‘”I am definitely not a morning person’). Holliday handles her own career — no agent, no publicist, no manager.”
These last two graphs say everything. Staying up all night watching movies, not getting up until noon or early afternoon, living on her own planet sans internet access and any sort of professional representation…forget it! She obviously wants to hide away, be excluded….lose.