N.Y. Times Oscar columnist David Carr (a.k.a. “the Bagger”) has written a pretty amusing account of last night’s premiere and after-party for The Good Shepherd, including a zero-energy, zero-connection interview with director Robert De Niro. 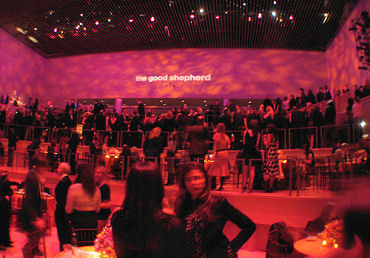 Carr quotes Universal publicist Michael Moses (“a fast-talking…exec with amazingly animated hands”) saying that “this is a real movie…it’s not something you’d see on television. Maybe we should have put a song-and-dance number into it — I hear those are quite popular — but after 9/11, people are very much interested in the C.I.A. We are really, really proud of the movie Bob made.”
I also attended the premiere and the after-party. The film didn’t play any differently for me the second time — muted, somber and funereal. I mentioned the last adjective to a very bright director friend, who replied as follows: “I liked it, actually. That said, ‘funereal’, although not the word I would personally choose to describe it, is accurate. It has a funereal atmosphere, almost aggressively so. What I liked [about it] is that it doesn’t pander in any way. It almost defies you to like it. You’re sitting there saying ‘what is this shit?…you haven’t made me interested in the story or care about the characters’ and it’s very easy to ‘get out’ [of the movie] if you want to do that…it doesn’t deploy the strategies that almost all movies do to bring you in and engage your sympathies. And I respected that.”
The party was held in a huge, multi-tiered space inside the Time Warner Center with a huge glass-wall view of Columbus Circle and Central Park. The lighting was rose tinted, the food was scrumptious, and I wasn’t able to slip into the ultra- exclusive third-tier section where De Niro, Brad Pitt, Angelina Jolie and all the big New York journalist heavies were hanging so nonchalantly. I asked my Univer- sal publicist pallies for help in this regard but my ambivalence — I didn’t care that much about gaining entry, but on the other hand I did — resulted in my saying “fuck it” and just enjoying the company of others who shared my situation.