Stiller’s kids did it

MSNBC freelancer Patrick Enright hasn’t caught Ben Stiller‘s latest film, Night at the Museum (which screens today at 3 pm, which in itself is usually a bad sign — films shown to the press during daylight hours are usually simple-ass family fodder) but he’s come up with an interesting theory that explains Stiller’s lamentable decline. 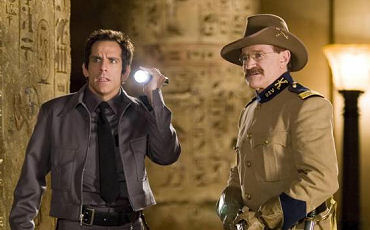 Three or four years ago, he recalls, Stiller’s comedies began to be less and less funny, with more than a few being flat-out difficult to sit through (Duplex, Envy, Dodgeball: A True Underdog Story, et. al.). And Enright’s theory is that Ben’s kids did it.
Don’t dismiss this to quickly as some cruel journalistic riff. Kids always make artist-parents more open to doing this or that job for the money, as cash fortifies the nest. I’m a parent and know whereof I speak — it’s a very natural, probably inescapable impulse. Why do you think Heath Ledger is playing the Joker in Chris Nolan‘s next Batman film?
“Some wags might be tempted to attribute your career implosion to bad management or drugs or Scientology,” Enright comments, “but the real culprit is much, much more sinister. Something else happened in 2002, the year your movies went south so drastically: Little Ella Olivia, your first child, was born. Coincidence? I think not. And you didn’t stop there; No. 2, Quinlan Dempsey, came along in ’05.
“Yes, I blame the children — it’s a well-substantiated, scientifically tested theory that having kids drains the talents of great comedians, leaving them hollow and laugh-deficient, capable of and interested in only fart jokes and the occasional animated movie.
“The once-hilarious Eddie Murphy went through exactly the same decline, starring in his first major bomb, Harlem Nights, the year his first kid appeared on the scene. Whether it’s caused by a hormonal shift that kills any sense of The Funny or springs from a desire to create movies that please the young spawn, the trend is career-fatal.”
I would go farther and say that for many artists, feeling happy and settled and soothed isn’t precisely “bad” for their creative output, but it doesn’t seem to exactly help either. This may sound deranged or masochistic to some (and I’m not saying it applies to each and every actor, comedian, writer and gallery artist) but some artists feel they need to be on the edge in order to keep themselves sharp and focused — to pick up on those shortwave transmissions that tell them what’s next and where to go.
Sidenote: Enright’s piece wrongly states that Stephen Sommers is the director of Night at the Museum (i.e., the passage in question calls the film “Steven Sommers’ attempt to bring his crazy Mummy antics to a setting that wouldn’t require travel to far-off locations.” Enright also obviously misspells Sommers’ first name, which is “Stephen.” It’s easy to fix this, guys…shake a leg.