Stephen Rodrick‘s Los Angeles magazine piece about Oscar bloggers (“The Blog Whisperers”) hit the stands yesterday, the main focus being on myself and MCN’s David Poland. I suppose Rodrick or his editor Kit Rachlis thought the Poland vs. Wells bitchfest was the tangiest aspect to run with, but… 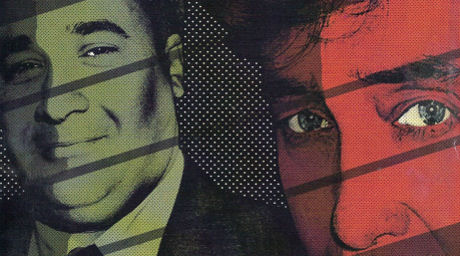 The piece is okay but a bit myopic in the sense that no attention is paid to The Envelope‘s Tom O’Neil and Hollywood Wiretap’s Pete Hammond. Poland and I are heavily in the game, of course, but these two guys mainline it. If I’m a “lapsed Catholic” or even an agnostic, O’Neil and Hammond are Elmer Gantry-like evangelicals.

Nonetheless, the subhead of the piece reads, “How two middle-aged, apartment-dwelling, Hollywood-obsessed rivals are quietly — and not so quietly — transforming the Oscar race.”

Rodrick talked, appropriately, to Oscarwatch.com‘s Sasha Stone and In Contention‘s Kris Tapley. They’re both flatteringly portrayed, Sasha especially — she comes off as the most grounded and level-headed of the bunch.

Here’s the cover and here’s the piece in five chunks — the opening visual, the cover page, page 3, page 4 and page 5 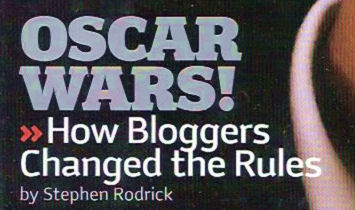 I’m running the link-and-look piece in order to argue and correct a few things, to wit:

Correction #1: Rodrick implies unholy collusion by saying that when he called to interview me in Manhattan last month, (a) he noticed a Little Miss Sunshine ad on HE and (b) I told him I was staying in Sunshine screenwriter Michael Arndt‘s place in Brooklyn. I’ve explained this before but let’s do it once again: Arndt and I met on Craig’s List in the spring of ’05 — I was looking for a summer-long apartment swap so I could lie in New York from June to August, and he was looking for a place to stay in Los Angeles while he was working on the Sunshine shoot. He’d read me and all, and yeah, we’ve stayed friendly since, but to imply a quid pro quo in terms of Sunshine ads is bogus and lame.

Correction #2: The production company I wasted 18 months working for in the late ’80s was called Kodiak Films, not “Kodiak Kodiak.”

Correction #3: I got divorced in 1991, not ’89. (A fact-checker called me in early January but she didn’t even ask me to confirm the biographical stuff.)

Correction #4: I didn’t switch to the internet in ’99, but in ’98, when I began my column for Mr. Showbiz. The Reel.com column, which began more or less when my L.A. Times Syndicate deal ended (after five years), launched in August ’99. 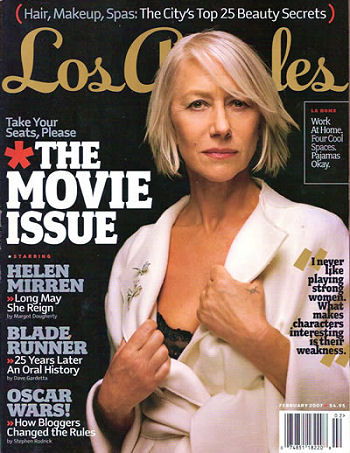 Correction #5: Poland has a spacious two-bedroom apartment; Rodrick writes that he lives in a one-bedroom one.

The piece is the piece is the piece — make of it what you will. Rodrick tries one more time to make me look like an ad suck-upper in a discussion of Children of Men and my having had difficulty getting an ad from Universal. My basic policy/ attitude is that I want ads from everybody — like any other web publication, my income is based on ad support. But the appeal of Hollywood Elsewhere is that I tend to write bluntly and candidly about stuff I’ve seen and am hearing from trusted sources and am thinking about. (Within the bounds of political propriety, of course.) Any whiff of editorial ass-kissing would obviously harm my credibility. On the other hand, I do try to make nice and encourage media buyers to look on the bright side and the benefits of advertising with HE.

Overall it’s flattering to be written about and I can roll with most of the snarky stuff that Rodrick and Rachlis are putting out. I mean, it doesn’t bother me hugely.

I was amused by the observation that “my eyes dart constantly, as if he’s going to have to fend off an attack at any moment.” I like that because it makes me sound like Leonardo DiCaprio‘s character in The Departed, whom I relate to. “He’s like a scared rabbit through it,” I said to Rodrick. “I thought he was great. I’m like a scared rabbit every day.” 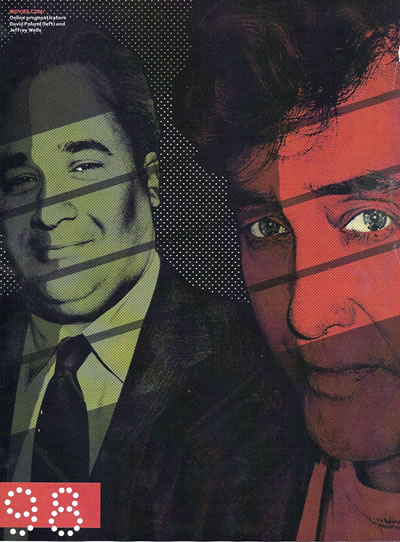