Find Me Guilty producer-co-screenwriter T.J Mancini is doggedly sticking with attempts to explain to anyone who’ll listen that the Yari Film Releasing Group (i.e., Bob Yari’s outfit) screwed up badly on the distribution and marketing of this esteemed moral fable/courtrom drama, which is one of Sidney Lumet‘s very best films and easily one of the best of ’06. 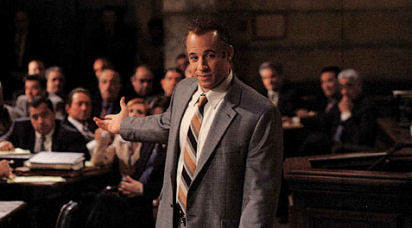 It’s old news and water under the bridge, but Mancini sent me a Find Me Guilty road-to-implosion timeline this morning, with commentary. He points out that Find Me Guilty was the first major film released by the new Yari Film Releasing Group (YFRG), and that
YFRG hired outside consultants to execute all marketing and distribution strategy ad basically “did what it wanted to do” — i.e., wore blinders, didn’t listen to anyone.
Mancini says that in the fall 2005, One Race Films (the producers) “asked YFRG to have the poster/one-sheet and trailer into theatres by Holiday/Xmas 2005…which didn√É¬¢√¢‚Äö¬¨√¢‚Äû¬¢t happen until mid-February 2006. Around the same time One Race Films asked YFRG to have multiple-market screenings as word-of-mouth would [most likely] drive the film — but YFRG had only one screening per market.”
He says that because YFRG “did not have anyone specifically working for it (aside from Isabel White, vp publicity), all decisions were made by people who had other jobs — which slowed down the decision-making process. And he says that “as FMG was the YFRG√É¬¢√¢‚Äö¬¨√¢‚Äû¬¢s first release and all execution was being done by outside consultants, Yari and all of his executives were unaware of the timeliness of all marketing strategy decisions and how those decisions impacted awareness, interest and first choice for opening weekend.”
He concludes that “the three Iimportant line items above would have made a difference to the entire campaign for Find Me Guilty and ultimately its opening weekend andoverall box office. These things were stressed to YFRG numerous times over numerous months by myself and the entire One Race Films group.” Alas, to little avail.
Perhaps, at the very least, this will inspired some to at least buy or rent the DVD and catch this very fine film.