I dropped by the Lakeside Lounge (Avenue B and 10th Street) late last night to catch the the punkish, hard-cranking, Ramones- resembling Martinets, whom I hadn’t seen for a couple of years. The initial lure when I saw them play two years ago was that Magnolia Pictures chief Eammon Bowles is their lead singer and rhythm guitarist. (The others are guitarist Daniel Red, bassist Dave Rick and drummer Roger Murdock.) 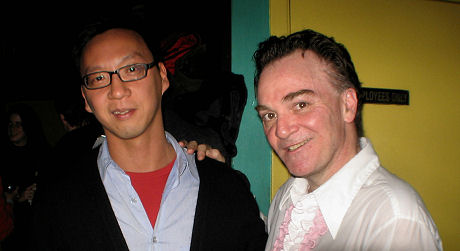 But I went last night knowing that they’re really good — listen to “Shake It Like a Man” — an mp3 is sitting on their MySpace page) — and that Bowles sings and plays like a total rock star.
IFC Films’ Ryan Werner, a Bowles pally for several years, was there also. Werner reminded me that An Unreasonable Man, IFC’s Ralph Nader doc, has been getting shitty mainstream media play so far, and that it deserves better. I missed it at last year’s Sundance Film Festival (Nader didn’t show because his mother had just died) and I guess on some level I didn’t want to see it because Nader basically caused the 2000 election to be won by George Bush, and what a wonderful thing that’s been for everyone. I guess I wanted to get him back by not seeing the doc, but that’s a petty-ass attitude.
Man has been praised by a lot of good people, and I’m making a point of seeing it when I get back to LA. I’ll never forgive Nader for what he did, but this feeling shouldn’t rule the entire roost.