The usual we’re-Sundance-and-we’re-proud-of- what-we-stand for themes were sounded by Robert Redford and festival program director Geoff Gilmore at the opening-day Sundance Film Festival press conference, which ended about 90 minutes ago. I don’t know if anyone was knocked flat by theser statements, but it was good to hear the Sundance fundamentals restated in a clear and concise fashion. 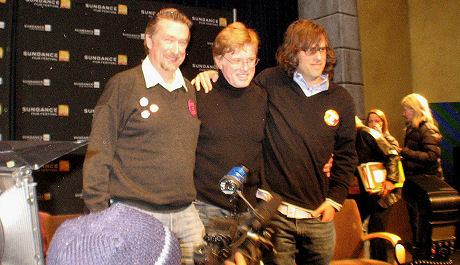 We’re about movies and not parties or ambush marketing, Redford said. We’re living in a very exciting, expansive and inclusive time, they both said. And I recall one of them saying that the line between narrative features and documentaries is blurring, and that’s good, and the more this happens the better for everyone. (I agree.)
I recorded the whole thing, but I’ll tell you right now that Redford spoke a little too softly and wasn’t adequately miked, so don’t expect much from the first five or six minutes. In fact, the whole recording is on the insufficient side. The clearest thing of all is me asking Redford and Gilmore a question; I was sitting right next to the Olympus recorder so duhhhh.
Chicago 10 director Brett Morgen joined them about halfway through the conference to talk about the genesis of his film, why he thinks a revisiting of the Chicago ’68 riots is relevant today, or at least why it should be, and to what extent his film is “political” (scary word, that) and why he decided that the first thing to get right was to make the film entertaining. 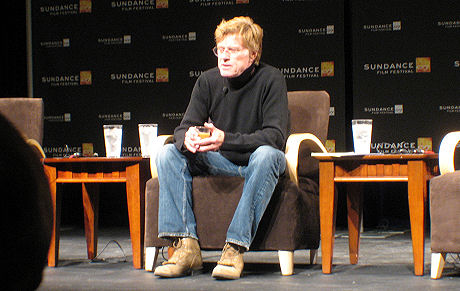