“It’s obviously possible for a movie to get nominated for Best Picture without its lead actors getting their own nominations. But is it possible for a film to be a Best Picture contender when its lead performances were widely panned, even by people who otherwise liked the movie? I’m referring, of course, to Beyonce Knowles, Jamie Foxx and Dreamgirls. 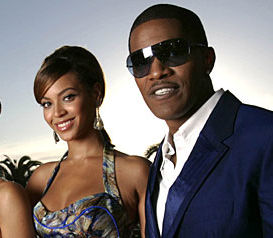 “Let’s face it — as much as everyone seemed to like Eddie Murphy and Jennifer Hudson, and as much as you could legitimately call this an ensemble picture, Jamie Foxx and Beyonce Knowles were the ostensible leads. The fact that they didn’t register in their roles might not entirely be their faults; look at the script. But whoever should be blamed, those are two pretty big holes right at the center/forefront of the film.
“Can anyone remember another Best Picture nominee about which most people said, ‘Yeah, I really loved that movie, even though the two leads were no good?’ I can’t even come up with a non-nominee right now that had viewers saying that en masse.
“For me, there were lots of other reasons why Dreamgirls was a failure, but I think that one had to at least subliminally factor into the voting among people who liked it a lot more than I did.
“I’m pleased with its omission. I can remember, after one of the very first screenings, when you quoted one lone naysayer to the effect that it was possible that it wouldn’t even get a nomination. That seemed far-fetched at the time, given the love, but when I shortly thereafter caught a screening, I wrote in wanting to affirm whatever hesitations you were having, just as another reality check.
“And I’m glad you’ve been temperate on the movie all along. I don’t think it deserves major hate, and I don’t begrudge you or anyone who liked it a little more than me for having some good things to say about it. But the idea that anyone really thought this was Best Picture material still floors me. Of course, I thought that about Crash, too. Nice to see the gods of rationalism prevail this time.
“Go, Departed. Go, Peter O’Toole. I don’t hate Little Miss Sunshine but please, God, don’t let it win.” — Los Angeles based journalist, in an e-mail received around 9:30 ayem.