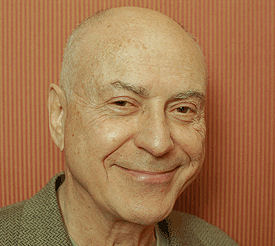 “Much of the smart money has been on Eddie Murphy for Dreamgirls, but, as several commentators have already noted, the release of Norbit in the middle of the voting period could cost Murphy dearly. It may not be the sort of movie Oscar voters go out for in droves, but no one with a television could have avoided the barrage of wretched, unfunny, even offensive ads in the run-up to its opening — ads that remind us of everything that√É¬¢√¢‚Äö¬¨√¢‚Äû¬¢s worst about a sometimes brilliant performer√É¬¢√¢‚Äö¬¨√¢‚Äû¬¢s work.

“If Murphy is out, then the award is Arkin√É¬¢√¢‚Äö¬¨√¢‚Äû¬¢s to win. Nearly everyone loved him in Little Miss Sunshine, a film that was itself hard to dislike. And he has 40 years of work, often great, behind him — a factor that, however unfairly, has been known to sway voters. It would also represent an Oscar comeback for Arkin, whose two previous nominations were in the √É¬¢√¢‚Äö¬¨√¢‚Äû¬¢60s.”