I didn’t ask Benicio del Toro at last night’s Three-Amigos-minus-one party about his intention to play “Lawrence Talbot” in Mark Romanek and Andrew Kevin Walker‘s The Wolfman, but we got into a couple details about Steven Soderbergh‘s two Che Guevara films — The Argentine and Guerilla — in which he’ll play the lead. 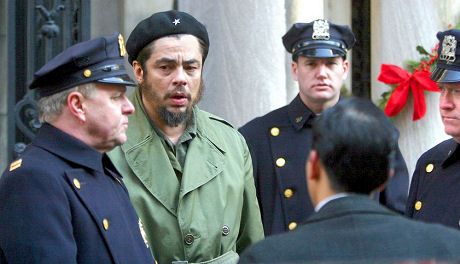 Shooting on the two Spanish-language films will begin (or so I recall reading) sometime in May or June. But first Soderbergh has to finish post-production on Ocean’s 13 (Warner Bros., 6.8.07). I think Benicio said something about the plan being to shoot Ernesto “Che” Guevara’s story in sequence — Argentine first, Guerilla second — but I can’t swear to it. This would make sense, of course.

I was later told by editor Stephen Mirrione — Oscar-nominated for his work on Babel, currently cutting Ocean’s Thirteen, hired to cut Guerilla — that Soderbergh has already cut together a sequence reel (he called it a “kind of trailer”) made from the footage of Benicio-as-Che visiting New York City in 1964, which was taken last year. Man, would I love to see this. It would also be great, naturally, to get hold of the Argentine and Guerilla scripts.

I asked Mirrione if Ocean’s Thirteen, which Clooney and others have said is a revenge piece, will resemble The Sting. Not that much, he said. The guy that the gang takes its revenge upon, he made clear, isn’t Andy Garcia‘s “Terry Benedict” character but Al Pacino‘s “Willie Banks.”