In a piece that asks if the Academy Awards are “color-blind at last,” Newsweek‘s Sean Smith and Allison Samuels note that “a segment within black Hollywood believes that white Academy voters reward black actors for roles that reinforce stereotypes — the angry black man, the noble slave, the sexualized black woman — rather than challenge them. 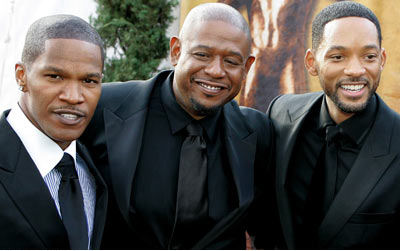 “There’s a sense that in order to be embraced by the white community, you probably did something that violates your integrity within the black community,”actress Kerry Washington, who stars opposite Forest Whitaker in The Last King of Scotland, tells Smith and Samuels.

And yet isn’t this precisely what N.Y. Press critic Armond White said about Whitaker’s Idi Amin in his Last King review? That it’s “another scary black man stereotype…by scaring the daylights out of his white sidekick (i.e., James McAvoy), Whitaker’s showcase comes off as little more than a super Training Day: King Kong Idi Amin.

“What rouses a thinking viewer’s skeptic is that the film is a deliberate fabrication. Screenwriter Peter Morgan (who also scripted Helen Mirren‘s sympathetic impersonation of Elizabeth II in Stephen Frears‘ The Queen), adapts this up-close view of Idi from a novel by Giles Foden that has scant basis in fact. There was no white Scottish confidante among Amin’s personnel.

“This simply continues that same ‘whites-first’ tactic in Cry Freedom and Mississippi Burning, where black characters are considered insufficient to dominate a narrative. The Last King of Scotland never tries to imagine Idi’s psychology or a black African perspective; Morgan leaves history to justify every demonizing cliche.

“It’s rare when a black movie actor is not playing a stereotype that comes from white fear and ignorance,” White wrote. “For that reason, it’s hard to get behind the hyperbolic acclaim for Whitaker’s sub-Emperor Jones star turn. The performance has Whitaker’s customary nuance, idiosyncratic gentleness and subtle power, so why do critics now pretend that Whitaker has created an indelible characterization?

“Critics duly noted Whitaker’s delicately detailed, deeply felt performances in Johnny Handsome, A Rage in Harlem, The Crying Game, Ghost Dog, Phone Booth and Panic Room — without crying out for Academy commendation. Those performances validated the broad span of American personality; Whitaker could be warmly masculine while changing perception of what was heroic. To single-out Whitaker’s Idi merely justifies the black stereotyping that Whitaker had avoided ever since his breakthrough in Clint Eastwood‘s 1988 Charlie Parker biographer Bird.”

February 4, 2007by Jeffrey Wells21 Comments
« Previous post
Clooney on U.S. impotence
Next post »
“Once” going out in the summer