Chris Cooper‘s diseased military dad in American Beauty was acid-intense, his Oscar-winning role in Adaptation was puckish and surly in all kinds of infectious ways, and his Alvin Dewey portrayal in Capote felt completely authentic. But his Breach performance as real-life FBI agent Robert Hanssen, a traitor who sold secrets to the Soviets for more than a dozen years, may be the most fascinating thing he’s ever done. 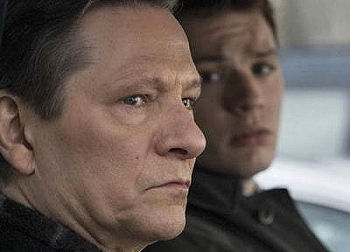 It sure felt that way to me during Tuesday night’s screening at Mann’s Chinese. Cooper takes a twisted uptight wackjob and turns him into a total “ride.” I was utterly riveted by his rigid, glaring eyes and the way his FBI-man air of impenetrability occasionally dissolves into faint twitchiness.

Cooper “carries himself with a rod-stiff posture and beetlelike precision, his face wrinkled into a permanent scowl and his voice lowered into a disagreeable bark,” writes L.A. Weekly critic Scott Foundas. “A dyed-in-the-wool agency man and devout Opus Dei Catholic, Hanssen devotes himself to work, family and God with the same ascetic rigor, sinning by night and begging forgiveness by day.

“And Cooper is the kind of actor who gets so deeply under the skin of a character that you stop thinking about a performer in a role and instead see only Hanssen and the high drama he was playing out for the better part of his career. Here is one of the best American actors in one of his best parts.”