It’s too early and it may seem a silly notion, but it may be time for all good people to rise up and band together in order to stop Johnny Depp from winning the Best Actor Oscar for his performance in Sweeney Todd. If anyone wants to launch a website to help amplify this feeling and (who knows?) maybe nip this one in the bud, I’ll contribute $100 bucks…seriously. He’s the one bad guy in the bunch who, I feel, really doesn’t deserve to win. Surely others feel this way? 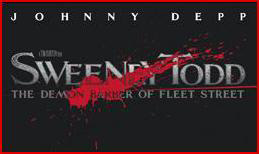 Okay, bad joke. But there’s this guy who wrote earlier today that he “believe[s] now that Depp is a 95% bet to be nominated for Best Actor as the title character in Sweeney Todd: The Demon Barber of Fleet Street in a very, very crowded field of 2007 male movie performances…and an 80% chance to win.” No offense, but it kinda rubbed me the wrong way.

Obviously nobody’s seen Sweeney Todd. (I saw the excellent Patti Lupone stage revival in New York least year.) Tim Burton’s film could blow everyone away, and Deep might out-do his work in Edward Scissorhands…who knows? But we all know it’s basically going to be another odd-baroque Burtonesque production-design trip — lots of exaggerated leers, period atmosphere, arterial blood, white smocks, Sondheim and straight razors. Maybe there’s a heart element in the stage play that I’ve forgotten about. I suspect the film will be mainly be about classy, high- toned, eye-catching perversity — the imaginative world of Tim Burton’s navel.

And while I realize I’m in the minority, I feel that Depp is going to have to be awfully damn good in Burton’s musical to overcome the resentment effect from having starred in those three “entertaining” but infuriating Pirates of the Caribbean films. Director Gore Verbinski and producer Jerry Bruckheimer are the perpetrators, I realize, and even I was okay with Depp’s japey attitude in the first installment. But Dead Man’s Chest was too long and a very rough sit, and I’d be lying if I said I was looking forward to At World’s End. (I can only say for sure that Keith Richards wears too much scuzzy makeup.)

All I know is that when I see Depp, I think about Cpt. Jack Sparrow and having a little touch of revenge. I don’t dislike Depp at all. It’s just that when I see him I think of all the money he made for the Pirates film and all the hours I’ve spent sitting in a theatre watching them so far, I think to myself, “A little payback might be fun.” By which I mean justified.

I’m not saying anyone else feels this way. It’s just me, it’s only February but I’m just sayin’ just for fun. It would be great if Sweeney Todd turns out wonderfully. Let’s hope for that. But if it doesn’t….