If you’re determined to believe something and you’re smart enough, you can always make a case for it — and it will sound half-reasonable. But when certain know-it-alls get into making a pitch along these lines, it can be truly fascinating to consider the motives, the personal politics and the mental contortions that went into it. 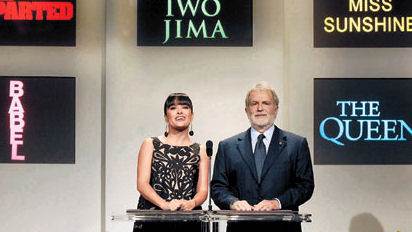 The defeat of Dreamgirls — i.e., its exclusion from being nominated for Best Picture — was a surprise to everyone, myself included. But it was also a thunderclap moment along the lines of Roman Polanskiwinning the Best Director Oscar for The Pianist. I didn’t like Dreamgirls all that much but I didn’t despise it, and yet I was thrilled by the sheer drama of hearing it had been slapped down. It was one of those “my God, the voters have really and truly spoken!” moments in history.

Given the shock-corridor factor and the difficulty of recovering from same, I can understand on a certain level why an almost comically revisionist view such as this one is being listened to and picked over. LIstening to this tape/video is like watching little lumps of mashed potatoes being thrown at the wall and watching some of them stick and others fall to the floor…plop.

It wasn’t good enough, the third act was weak, Beyonce’s character amounted to almost nothing, that moment with Jamie Foxx looking at Jennifer Hudson’s kid at the very end — throw it all together and the ensemble message on the ticker tape read, “Not bad, pretty good but no cigar.”

Do you, HE readers, believe that (a) Dreamgirls would have won the Oscar if it had been nominated for Best Picture?, (b) that it lost $30 million in revenue “at least” because it wasn’t nominated? and (c) that the Dreamgirls slapdown “hurt the industry”?